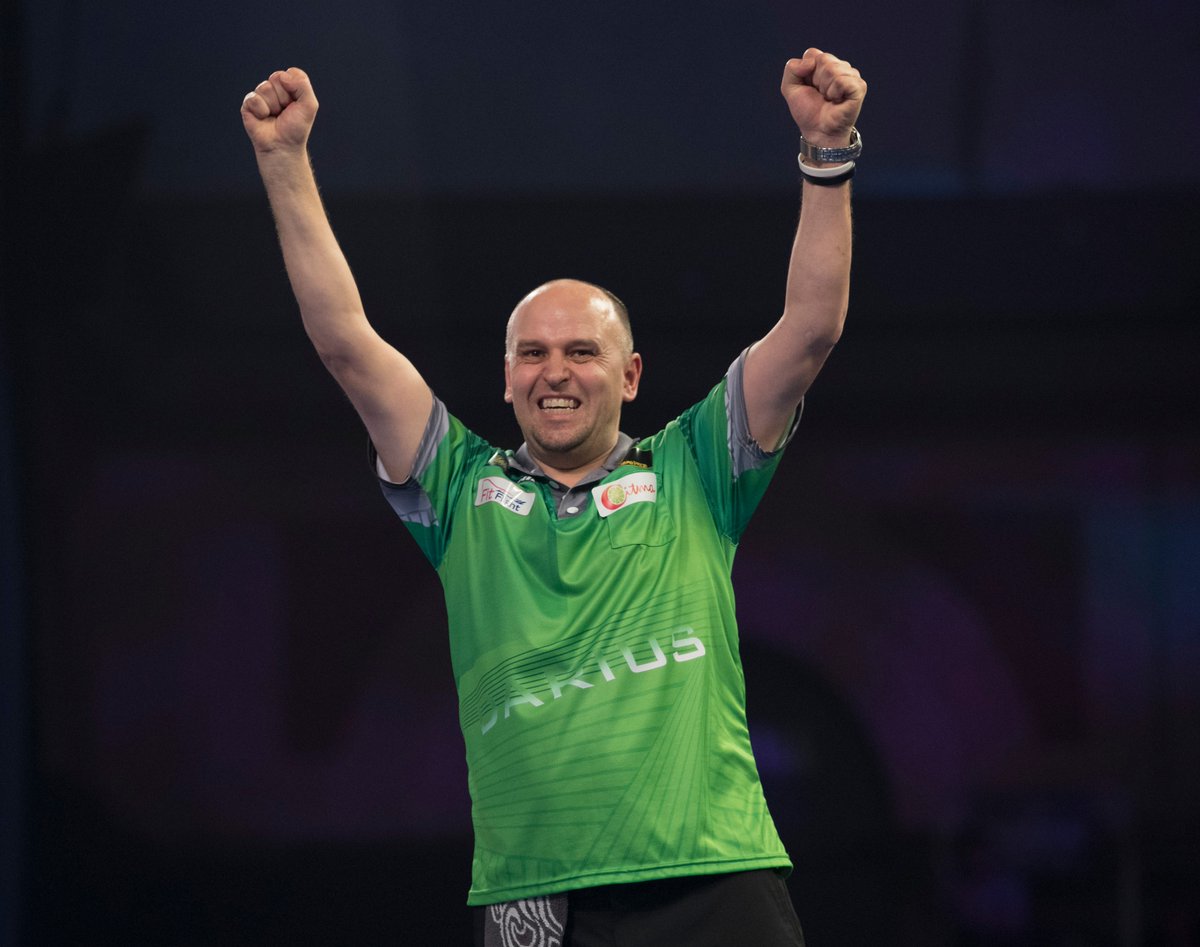 The first Lithuanian to star in the World Championship, Labanauskas held his nerve to claim a 3-2 victory and the second upset of the tournament in as many nights after Peter Wright crashed out to Toni Alcinas on Sunday.

Labanauskas took the first set 3-1 with an average of 102.05 to pile the pressure on the five-time World Champion.

Van Barneveld edged the second set 3-2 but missed four darts to win set three before his Lithuanian opponent pinched it on double six.

The fourth set also reached a deciding leg, which the Dutchman won on double 16 to level up the match.

Labanauskas raced through the fifth and final set, however, winning it 3-0 to dump out Van Barneveld, who recently announced that he will retire at the end of 2019.

"I can't believe it, this is 100 percent the biggest win of my life," said an ecstatic Labanauskas.

"At the start of my first set I wasn't feeling good but I've been getting better and better the more time I spend on that incredible stage.

"This is massive for me, to beat a player of the calibre of Van Barneveld's class gives me great confidence for the rest of the tournament."

“This is a very painful defeat, I really have no explanation for this performance and I can’t tell you how much this defeat hurts," said Van Barneveld.

"I’m not sure what happened because everything went right before this match. I felt really good before I got on the stage and was practising well but for some reason that changed when I got on stage.

“I don’t know if it was tension or what it was but I had enough chances and I didn’t take them. I should’ve won the third set and I didn’t so all of the confidence I had, I started to lose."

Devon Petersen won a dramatic last leg decider against Wayne Jones to set up a second round meeting with Ian White.

South African number one Petersen edged the first set with a 94 checkout before taking the next 3-0 with the aid of a 101 checkout to double his lead.

Jones responded by finishing 102 to spark a whitewash set of his own - and the Wolverhampton thrower edged the fourth set in a deciding leg to level up the match.

Petersen took out 120 to win the third leg of the final set but Jones forced a decider, which saw both players miss opportunities to progress.

Jones failed with six attempts at match-winning doubles before Petersen finally found the target at the eighth time of asking.

"I don't mean to sound cocky but I think in the end the right man won," said Petersen, who was making his sixth World Championship appearance.

"I felt like I was cruising and I probably taking the foot off the gas a bit and I almost paid the price for that but I came through in the end.

"It feels phenomenal to still be in this magnificent tournament and I think this game will stand me in good stead for my game with Ian."

Ryan Joyce claimed a comfortable victory on his World Championship debut as he saw off Anastasia Dobromyslova in straight sets.

Dobromyslova opened with a 140 and took the first leg on double eight but consecutive finishes of 106 and 122 turned the set in Joyce's favour - and he wrapped it up by taking out 95.

Joyce won the second set 3-0 but was pushed all the way to a deciding leg in set four as Dobromyslova battled back - but she was unable to claim a set on her return to Alexandra Palace as Joyce landed double six to complete the win.

Vincent van der Voort fought off a spirited performance from Lourence Illagan to secure a 3-1 win in his opening match of his 12th consecutive World Championship appearance.

The Dutchman won the first set 3-1 with the aid of a 91 checkout but 120 and 81 finishes helped Ilagan take set two to level up the match.

Asian Tour winner Ilagan missed a dart to move a set ahead and was punished by his Dutch opponent, who took out 64 in the deciding leg of set three to regain the lead.

Illagan clinched the first leg of the fourth set with a 106 finish and the animated Philippines star doubled his lead - but went on to miss four darts to win the set as Van der Voort turned it around to set up a meeting with Darren Webster in the second round on Tuesday.

"I think my experience won me that game, it wasn't as comfortable as the scoreline suggests," said former UK Open finalist Van der Voort.

"To be honest I think Lourence was the better player but I stuck at it and I'm so happy to get that win."

The action continues on Tuesday with six more first round ties and two second round clashes across two sessions, including world number five Daryl Gurney beginning his campaign against Ross Smith.

The £2.5 million tournament is being broadcast live on the dedicated Sky Sports Darts channel from December 13-January 1 and worldwide through the PDC's international broadcast partners.