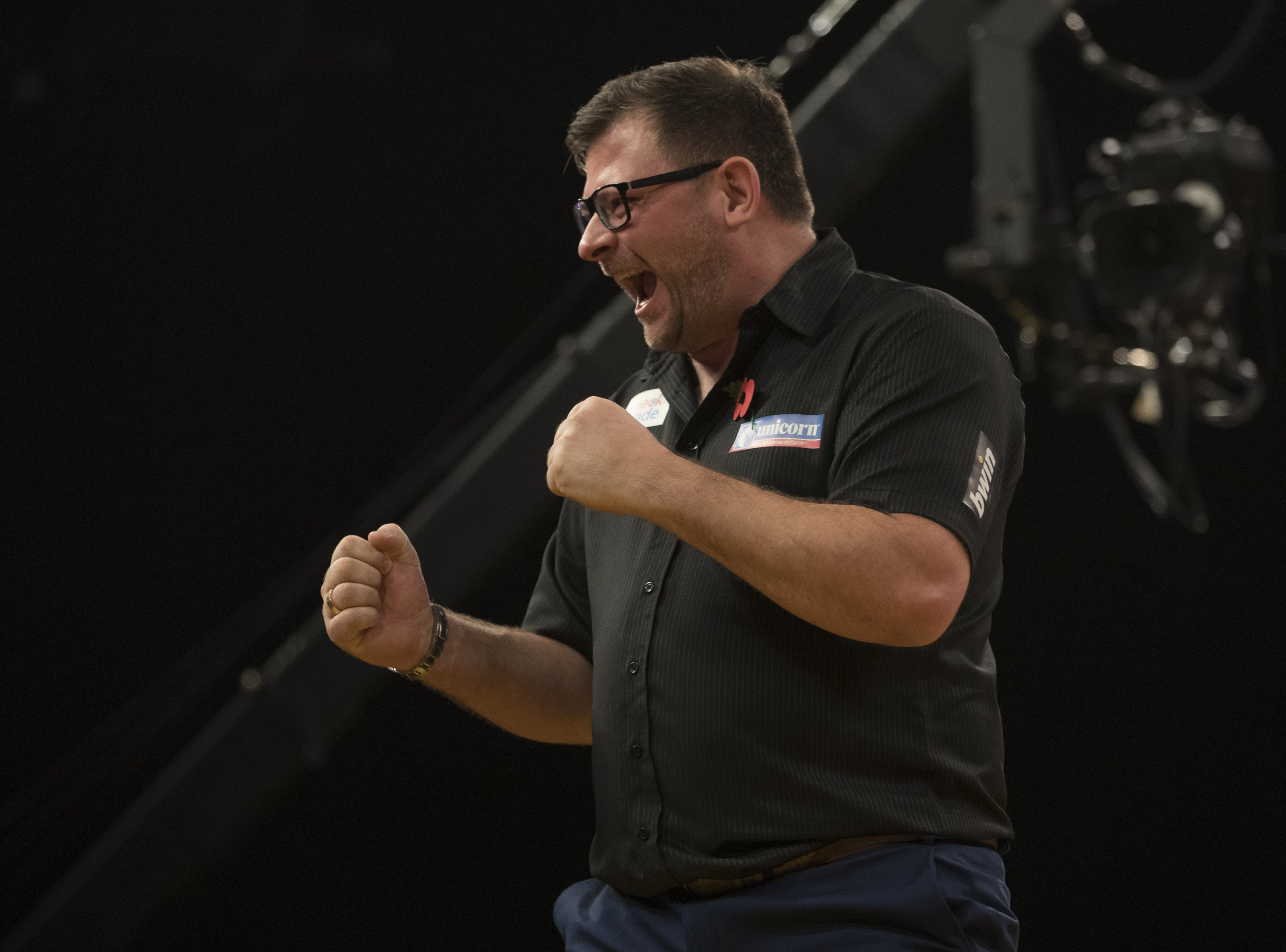 JAMES WADE claimed a third PDC title in eight days thanks to an 8-5 win over Jeffrey de Zwaan in the final of Players Championship 12 in Barnsley on Sunday.

Wade followed up his Players Championship 11 triumph on Saturday with a series of further impressive displays to round off a perfect weekend and join Gerwyn Price in winning back-to-back ProTour titles in 2019.

The start of the day saw Wade narrowly avoid a first round exit to Luke Woodhouse, coming through a deciding leg, before averaging 108.7 in a 6-0 whitewash of Christian Kist.

Wade once again came through a sudden-death shoot-out against Ted Evetts, and then averaged 104.7 to beat Stephen Bunting 6-4 and progress to the quarter-finals.

A convincing 6-2 triumph over Jonny Clayton followed, before Wade defeated Michael Smith 7-4 in a repeat of Saturday's final to make it 15 victories in his last 16 meetings with the World Championship runner-up.

Wade found himself trailing 4-0 to De Zwaan in the final game of the weekend, but a resilient display saw him battle back to take his weekend winnings up to £20,000.

"When you get to my age and you haven't played so well for five years, it's really special to win back-to-back titles," said Wade.

"I thought I was dead and buried in the final. I was feeling a little bit tired and I didn't play anywhere near as well as I did in two or three other games today.

"But I'm really happy to win. I've been playing this game at the top level for 15 years now but the best may be to come.

"The sky's the limit and hopefully I can win a few more."

The final began with De Zwaan getting off to a flying start thanks to some clinical finishing, breaking throw twice as he raced into a 4-0 lead.

But after the Dutchman missed two darts at tops for 5-0 advantage, Wade took out 68 to break throw and get his first leg on the board.

Wade fired in a trademark 106 finish for another break, before finding double top to hold throw and level it up at 4-4.

De Zwaan pinned the same target to stop the rot and regain the lead, only for Wade to reel off the next three legs, including a 108 checkout, to secure his second title in as many days.

Despite defeat in the final, De Zwaan enjoyed a run to his first ProTour final since his maiden ProTour win in Wigan almost a year ago.

An impressive day from the World Matchplay semi-finalist saw him post averages of 103.5, 102.5 and 106.8 in his wins over Steve Beaton, Glen Durrant and John Henderson respectively to reach his fourth ProTour final.

Sunday once again saw 128 of the world's best players in action at The Barnsley Metrodome, with departing Dutchman Raymond van Barneveld enduring another difficult day as he fell at the first hurdle.

Australia's Corey Cadby reached the last 16 for the first time since his return to action, while Glen Durrant made it through to the quarter-finals for the third time since winning his Tour Card in January 2019.

Premier League stars Peter Wright and Daryl Gurney both exited before the last 32 stage, while Price went out at the last 16 despite averaging 105.2 in defeat to Danny Noppert.

The next Players Championship events will be held across April 30-May 1 at The Barnsley Metrodome, with live action shown on video.pdc.tv