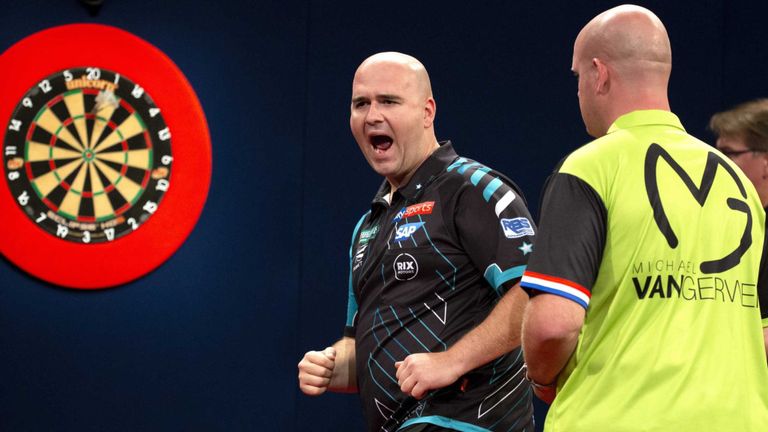 Christopher Kempf, the statistical analyst of the PDC, takes a look at the rivalry between Michael van Gerwen and Rob Cross ahead of their meeting in Cardiff on Night 12 of the Unibet Premier League.

It began auspiciously three years ago, when Rob Cross, having qualified as an amateur for the 2016 UK Open, held his own for the better part of two sessions of televised darts against Michael van Gerwen before being swept away by three of the greatest legs of darts ever seen; a nine-dart leg bookended by 170 checkouts.

As Cross' meteoric rise after winning a tour card in 2017 became the talk of the darts world, the reigning king of darts not only found himself challenged regularly by the Hastings débutant, but forced to throw his best darts to fend off Cross' challenges.

With Gary Anderson recuperating from a back injury, Van Gerwen's extraordinary rivalry with the Scottish number one has been put temporarily on hold, the Cross-Van Gerwen rivalry is currently the most exciting match-up of the post-Phil Taylor era.

Van Gerwen and Cross are the world one and two. Between them, they are the winners of the last three World Championships.

They occupy the top two spots on the Premier League table. They have recorded higher averages in 2019 to date than any other Tour Card Holder.

Any alternative ideas as to which player is the second-best in the world must persuasively argue against that overwhelming evidence.

The career series of 16 matches between the two has broken heavily in favour of Van Gerwen, with the Dutchman leading the career series 13-3, including an undefeated record in the Premier League (Van Gerwen has won all three best-of-12 matches by a score of 7-2.)

Cross has also had the misfortune of losing to Van Gerwen each time he has reached a final on the European Tour, with the result that Cross is still looking to obtain his first such title.

But outweighing all of these is the enormity of Cross' upset win at the 2018 World Championship, a match which is altogether one of the best and most significant in the history of darts.

The shock of missing six match darts in a deciding leg, as MvG did in that match, hangs like a pall over all the other triumphs MvG has attained at Rob Cross' expense.

Of the 16 meetings between the world's two top players, 15 featured at least one player averaging over 100, and both players did so in 8 of the 16.

Relative to their overall averages against any other opponent, both players boost their averages by about 3 points when playing each other.

In a Cross-Van Gerwen match, one is likely to see two 180s for every three legs played, and at least one leg won in 12 darts or less for every 4 contested.

Even if Van Gerwen has typically had the upper hand in their encounters, he has managed only to win 57% of legs while winning 81% of matches.

For Cross is not without authoritative wins of his own; consider his second TV title in Brisbane, a tournament which marked the first (and to date only) time on which Cross out-averaged his rival, hitting 52.4% of his treble 20s.

Given that the long-term averages of Cross (99.02) and Van Gerwen (101.22) are the leading figures for the PDC and are relatively close to each other, the question remains: Is Cross likely to have won just 19% of his matches against MvG five years from now?

If not, then tonight's match in Cardiff could be not only one that secures his position atop the 2019 Premier League, but begins to restore parity to the best rivalry in darts at the moment and writes another chapter in their thrilling, contentious history.

Odds courtesy www.unibet.co.uk and correct at time of writing. Subject to fluctuation.