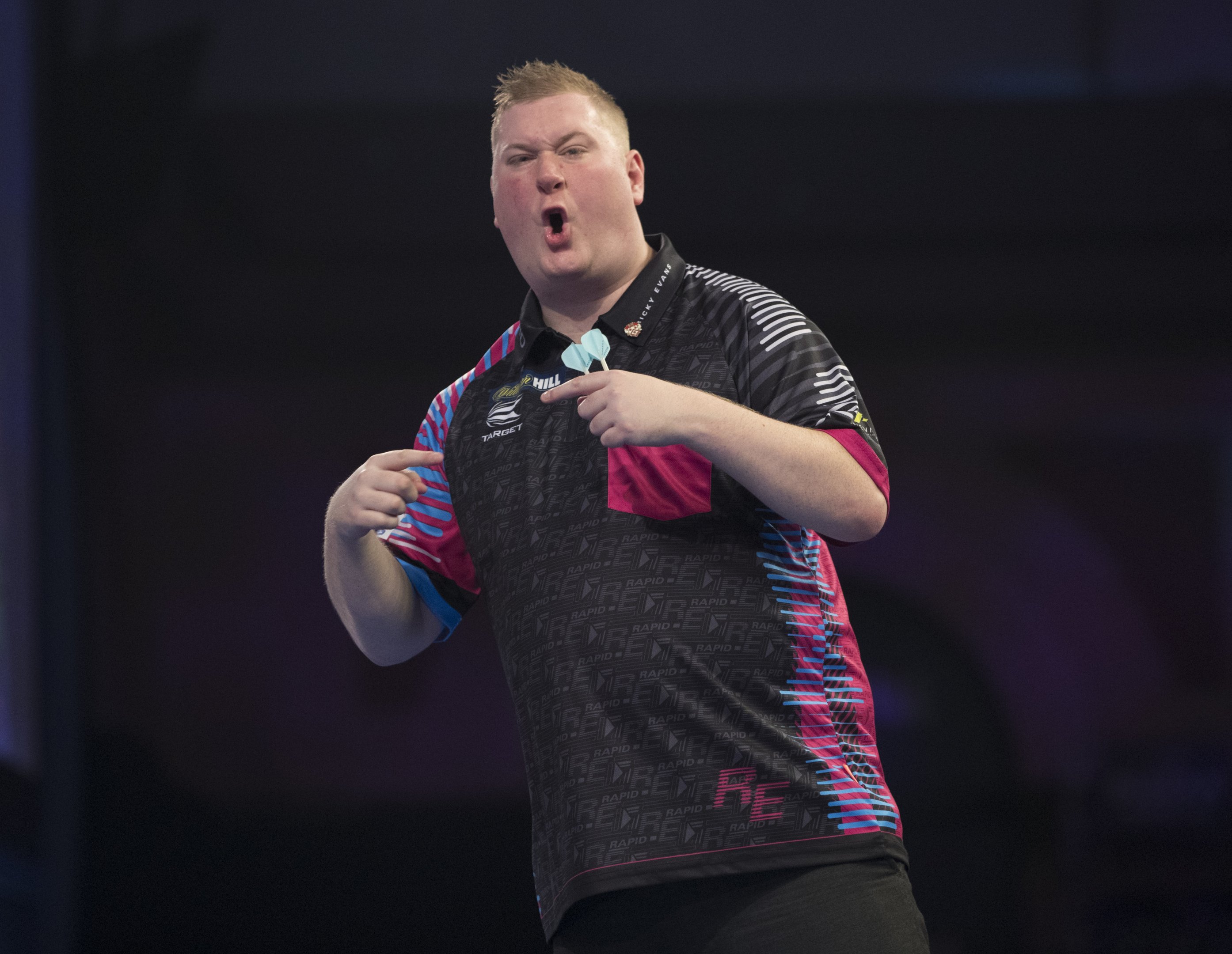 RICKY EVANS claimed a shock 6-0 win over Michael Smith, while Michael van Gerwen and Rob Cross were among the winners in round two of the German Darts Grand Prix in Munich on Sunday.

Evans, who reached the final of the German Darts Championship in March, restricted Smith to just two darts at double as he got his bid for a first PDC title off to a flying start.

"Michael is normally the one doing that to me so I'm not going to get complacent, but I'm very glad to be through," said Evans.

"I've never beaten Michael in the PDC so it's nice to get that monkey off my back and it's a great feeling to beat such a top player.

"I'm delighted to be in the next round and hopefully I can go one better than last time."

Evans will face Ted Evetts in round three, after the multiple-Development Tour event winner produced another confident display, landing two ton-plus checkouts in a 6-2 win over Jonny Clayton.

Sunday's second round of the £140,000 tournament saw Saturday's 16 winning Qualifiers take on the 16 seeded players, as seven seeds suffered defeat at the Kulturhalle Zenith.

Reigning champion Van Gerwen was made to work hard for his 6-4 victory over Poland's Krzysztof Ratajski, but a 114 winning finish ensured the World Champion remains on course for an incredible 30th European Tour title.

The world number one will now meet Stephen Bunting, who once again caught the eye in his second successive 6-1 win of the weekend against Danny Noppert.

A resilient display from Joe Cullen saw him recover from 4-1 down to defeat Glen Durrant 6-5 in a gripping contest.

Durrant got off to a flying start and led 3-0 before Cullen took out a 146 checkout to get his first leg on the board, only for Durrant to restore his three-leg cushion.

Cullen dug deep to take the match to a deciding leg which he ended with five consecutive treble 20s before finding double five for a 130 finish to win the decider against throw in spectacular style.

"The European Tour brings the best out of me every time, I love playing in Germany," said Cullen.

"No matter how tough the draw is I play well in these events, and even though I was 4-1 down I noticed Glen was struggling to find the treble a bit which gave me confidence.

"To win it with that 130 at the end was pretty special and gives me extra belief going into tomorrow."

Cullen will take on Ritchie Edhouse who claimed a shock 6-5 win over two-time World Champion Adrian Lewis, winning the deciding leg with a stunning 160 finish.

The sole German representative heading into Sunday, Max Hopp delighted the Munich crowd with a 6-3 success over Keegan Brown and he will now meet Kim Huybrechts, who survived a match dart before taking out 70 to knock out European Champion James Wade 6-5.

World number two Cross began his quest for a maiden European Tour title with a 6-3 victory over Austria's Michael Rasztovits and he will now face world number five Daryl Gurney, who saw off Kyle Anderson 6-4.

European Tour fans' favourite Mensur Suljovic will meet Dave Chisnall after the pair claimed 6-2 victories over Josh Payne and Arron Monk respectively, with Chisnall averaging 108.96, the highest of the tournament so far.

Simon Whitlock claimed a much-needed 6-4 win over Cristo Reyes and he will now come up against in-form Ross Smith, who got the better of third seed Peter Wright 6-4.

Darren Webster returned to form with an emphatic 6-1 triumph over Nathan Derry, and he will take on Czech Karel Sedlacek, who defeated second seed Ian White 6-4 in a game of missed doubles.

Monday's third and final day of the German Darts Grand Prix will see the last 16 matches take place in the afternoon session, before the quarter-finals, semi-finals and final in the evening.

All the action will be broadcast on video.pdc.tv, and through a series of bookmakers' websites worldwide.

PDC European Tour events can be watched online through PDCTV-HD for all subscribers worldwide.