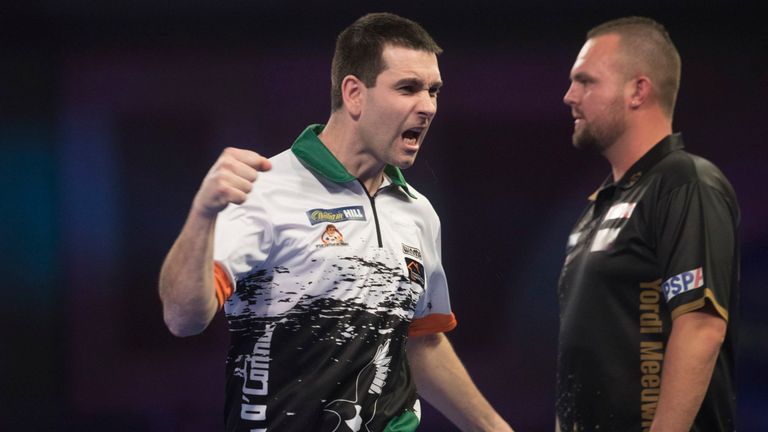 O'Connor, who has competed on the PDC ProTour circuit since 2011, edged out Rowby-John Rodriguez 6-5 in his opening game of the day, before seeing off Luke Humphires and Luke Woodhouse 6-2 to reach the last 16.

There, he produced a stunning display, averaging 105.8 in a 6-4 win over Steve Beaton, which the Irishman followed up with a 6-5 quarter-final triumph over Jeffrey de Zwaan.

A 102.2 average was enough to overcome Daryl Gurney 7-5 in the semi-finals, before a convincing victory over Aspinall saw O'Connor land the £10,000 top prize.

"I'm a bit overwhelmed by it but I'm so happy to have won my first title," said O'Connor, who will represent the Republic of Ireland at the BetVictor World Cup of Darts in June.

"I've been playing well all year but haven't had any good results, so maybe I've used all my luck in one day.

"I'm happy to move up the rankings a bit and now I want to add a couple more titles to my name and see where it takes me.

"I have the game to win more, I just need to be more consistent and produce a lot better than I have been doing over the years, but the same can be said for many players on tour."

A hard-fought final began with four consecutive breaks of throw, before the pair exchanged holds to make it 3-3 after a tight opening.

O'Connor then hit tops to hold throw once again, and followed it with an 11-dart break to open up a two-leg gap for the first time at 5-3.

The Irish number two made no mistake on double 16 to assert his dominance at 6-3, before Aspinall stopped the rot with a hold of throw.

However, O'Connor showed no signs of wavering as he found double 12 for a 13-darter to go within a leg of the title, before the determined former Tom Kirby Memorial Trophy winner saw off 68 to seal a famous win.

Despite a below-par display in the final, Aspinall continued his sensational form with a first final appearance since being crowned UK Open Champion in March.

The World Championship semi-finalist, who claimed his first PDC title in Barnsley in September 2018, defeated Adrian Lewis 7-4 in a thrilling semi-final in what turned out to be the highlight of the Stockport thrower's day.

Elsewhere, Justin Pipe made it two quarter-final appearances in just over a month, while Christian Kist enjoyed a return to form with a first quarter-final berth since November 2016.

Departing Dutchman Raymond van Barneveld continued his resurgence with a run to the last 16, which included a first round defeat of Corey Cadby, while Peter Wright also made it to the last eight.

Premier League stars Gerwyn Price and Michael Smith were joined by Glen Durrant in exiting the tournament before the last 16 stage, while it was a disappointing return to Gary Anderson who was eliminated in the first round.

Wednesday will see the second day of the Players Championship mid-week action in Barnsley, with live streaming from two boards simultaneously on video.pdc.tv. Follow fixtures, results and live match stats through Dart Connect.