Price: 'I Won't Stop Being Me' 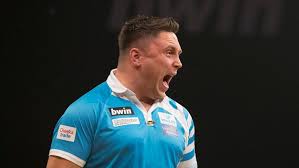 GERWYN PRICE has vowed not to change his playing style heading into Thursday's crucial Unibet Premier League clash with Peter Wright in Leeds.

The Premier League's regular season concludes with a final night of fixtures at the First Direct Arena in Leeds on Thursday, where Price is one of four players vying for the final two Play-Off places.

Welshman Price must win or draw to keep his Play-Off hopes alive and then hope results go his way later in the night, and the Grand Slam of Darts Champion is hoping he won't be left ruing missed chances amongst six draws this season.

Tempers flared between Price and fellow-Play-Off chaser Daryl Gurney on stage after their draw in Sheffield last Thursday, but Price insists the incident is behind them both as he looks to book a debut appearance at The O2.

"I met up with Daryl, he apologised to me for overreacting and I said 'fair play' to him for that,"said Price, who missed a match dart against Gurney.

"We've made it up now and put it behind us. Now I'm just focused on this

"Last week's game meant a lot to me, I knew I needed a win or at least a draw and I should've won. But it didn't go my way and I've got to move on now.

"At the start of the league I would've taken being in this position but going back five or six weeks I would've been disappointed for the situation to be out of my hands.

"If I don't go through it's still been a brilliant year for me in the Premier League, even though I drew too many games.

"I'm going to keep being me and playing my own game."

The 16th and final league phase night of the Unibet Premier League in Leeds will be shown live on Sky Sports, worldwide through the PDC's broadcast partners, and through video.pdc.tv for Rest of the World Subscribers.

Tickets for Thursday's Unibet Premier League at the First Direct Arena in Leeds are still available and can be PURCHASED HERE or by calling 0844 248 1585.

Hospitality Packages can be purchased through Sport and Music.