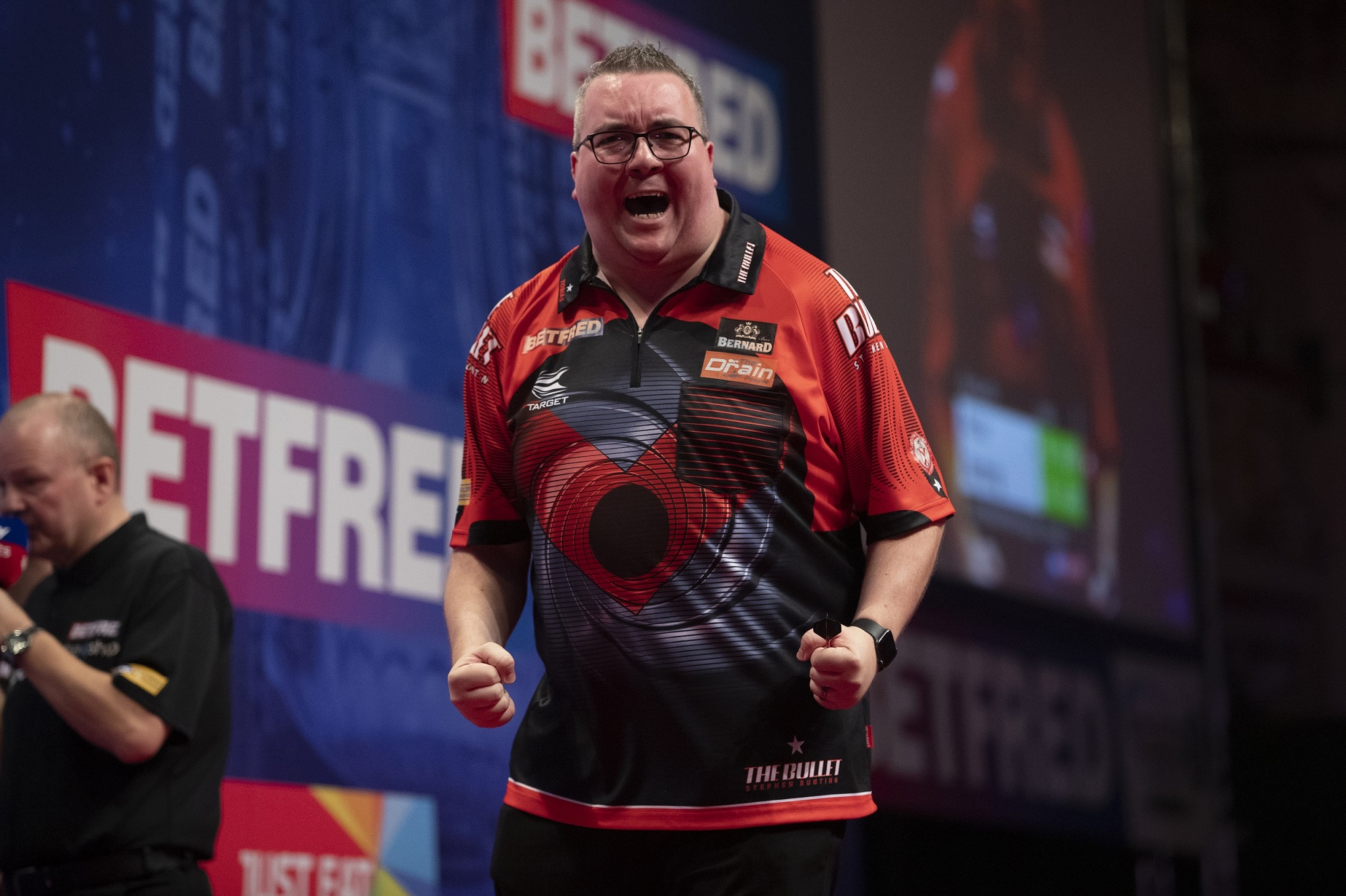 STEPHEN BUNTING snatched sudden-death glory against Gerwyn Price on the opening night of the Betfred World Matchplay as Gary Anderson began his title defence in Blackpool by seeing off Danny Noppert.

St Helens ace Bunting took victory in a thrilling first round tie at the Winter Gardens as he edged Welshman Price 13-12 to claim his first win in the event for five years.

Grand Slam of Darts champion Price had enjoyed the advantage throughout much of an epic contest, taking early leads of 3-0 and 4-1 and maintaining a two-leg cushion at 8-6.

Bunting hit back to level with two successive legs, and the next six legs were shared as the game went into a tie-break and left the pair locked at 11-all.

Bunting then took out 85 on the bull to lead for the first time, only to miss four match darts in leg 24 as Price hit back to post double ten and send the game into a one-leg shoot-out.

Price opened the final leg with a 180, but missed one dart at the bull for victory before Bunting stepped in to finish 79 on double 11 to take a remarkable win.

"It's probably one of the biggest wins I've ever had in the PDC," admitted Bunting. "To win any game here is special, but against one of the best players in the world was extra special.

"He hit some good scores at the start of legs to make it difficult for me, and I was chasing the game for a long time - but I hung on in there.

"To come through a game like that against a fantastic player like Gerwyn is a boost to my confidence. I've got a nice break now until Wednesday so I'll have a break on Sunday and then get back on the practice board."

Reigning champion Anderson opened his bid to retain the Phil Taylor Trophy with a 10-6 defeat of Dutch debutant Danny Noppert.

Anderson capitalised on a sluggish start from Noppert to win the opening four legs without reply, and also took out finishes of 135 on the bull and 111 to move 7-3 up.

Noppert pulled back to 7-6 at one stage, but Anderson won a crucial 14th leg and took out a huge 160 finish to lead 9-6 before closing out the win.

"I was a bit nervy up there but I got through it and it's good to be in the next round," said Anderson, who edged last year's epic final 21-19 against Mensur Suljovic.

"I probably made it harder for myself than it could have been. I was great on the practice board but it wasn't as good on stage and my finishing pulled me through at times there.

"I'm still getting back into it. People know I've not played much this year and there were some dodgy darts there, but also some good darts."

Anderson will now meet Mervyn King in round two, after the 2009 semi-finalist overcame 13th seed Nathan Aspinall 10-5 in a see-saw opening fixture in Blackpool.

King stormed out of the blocks to win four of the opening five legs in a superb start to the contest, landing five 180s, a 104 finish, an 85 combination on the bull and a 12-darter along the way.

Recent US Darts Masters winner Aspinall then hit back with four straight legs, which included a 127 checkout, as he hauled himself back into the game and then moved 5-4 up.

King, though, levelled with a 14-darter and then produced a hammer blow with a 160 checkout to regain the lead at 6-5.

Missed doubles in the next three legs from UK Open champion Aspinall were punished by the Norfolk ace as King - a Blackpool semi-finalist in 2009 - opened up a 9-5 cushion before a superb 11-darter completed a fine win.

King averaged just over 100 and finished ten doubles from 16 attempts in a clinical display as he won past the first round for the first time since 2016.

"I'm very pleased with that," said King. "I started well, fell asleep in the middle and woke up at the end.

"I think I shoot him a little bit at the start and he played some excellent darts in the second session. After that first break my first dart was dropping low, but I refocused myself at five-all.

"The 160 was a big moment to show that I wasn't going away. My game is always there and it's all about whether it comes out, but if Mervyn King turns up then I'll win."

2018 World Champion Rob Cross powered into the last 16 with a 10-3 defeat of Chris Dobey, who never recovered from a slow start on his Blackpool debut.

Dobey finished 145 to hit back in leg eight, but Cross fired in six perfect darts as he restored his advantage before pulling away to seal victory with a 130 checkout.

"It's nice to get over the winning line with no fuss," said Cross. "I wasn't great in the first five legs, and even though I was 4-1 up I was a bit edgy, but I settled down after that and took the initiative in the second session and started to play proper darts.

"If Chris had won the first leg, when he missed a couple of doubles, it could have been a different game. He's a class act and he's one for the future.

"I think it's the first time in three years here that I've found my feet and pushed on like that.

"I probably get better as the game goes on, and overall I'm happy with how I'm playing - but I don't feel like I've played my best darts yet. I love this event and I want to do well this week."

The first round continues on Sunday with a double session at the Winter Gardens, which includes two-time champion Michael van Gerwen up against Steve Beaton and 2007 winner James Wade taking on 2018 semi-finalist Jeffrey de Zwaan.

For ways to watch the Betfred World Matchplay - CLICK HERE.

Format
Best of 19 legs
* Each game must be won by two clear legs, with up to a maximum of five additional legs being played before the sixth additional leg is sudden-death. For example, should a First Round game (best of 19 legs) reach 12-12, then the 25th leg would be the final and deciding leg.