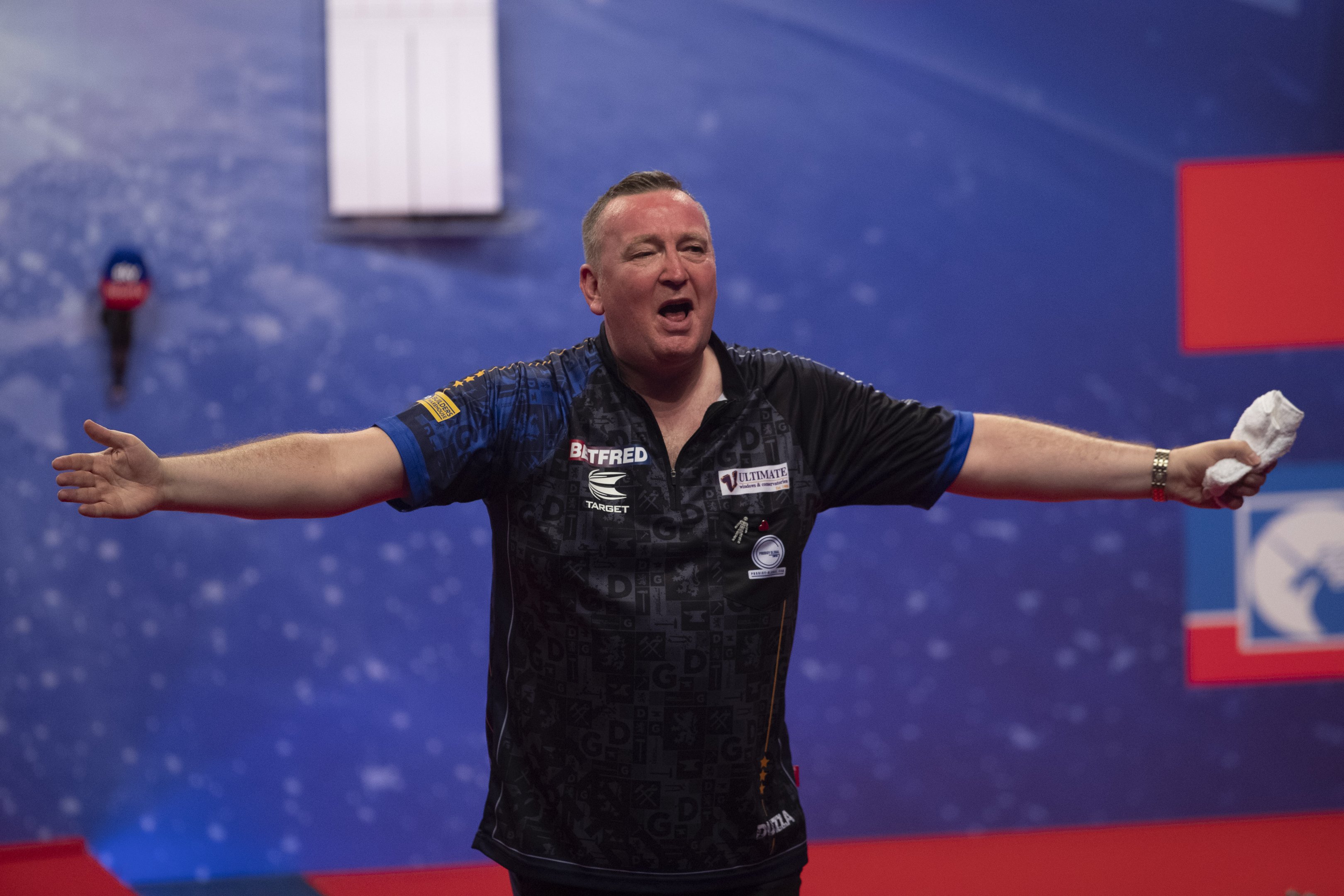 A thriller between two-time World Matchplay champion Van Gerwen and debutant Durrant had the Winter Gardens crowd on the edge of their seats throughout the pulsating 58 minute match on night four of the summer's biggest darts event.

Three-time Lakeside Champion Durrant was visibly moved by the rousing reception he received after his win, and hailed it as one of the best nights of his life as he overcame the world number one.

"This night will live with me forever, I've never experienced a crowd getting behind me like that," said Durrant, who will face James Wade in the quarter-finals.

"At times I forgot I was playing Michael van Gerwen, and when I realised I was in with a chance of winning the emotions were incredible.

"I went for a walk on the beach earlier today and I ended up getting sunburn, and that along with the incredible heat up there made it even harder for me.

"I now need to go away, relax and contemplate what I've done and look ahead to the rest of the tournament, but whatever happens from now on in my career this moment will never be taken away from me."

Van Gerwen, who came into the game under pressure following a string of below-par performances, got off to a slow start and Durrant capitalised to lead 3-2.

The eighth leg saw Durrant hit seven perfect darts on his way to going 5-3 ahead with a ten-darter, and the Middlesbrough man extended his lead by winning the next two legs to go 7-4 in front.

At 8-5 down, World Champion Van Gerwen produced his best leg of the match, an 11-darter, to break back and then continued his improved level of performance to go in front for the first time since leg one at 9-8.

Undeterred, Durrant twice held throw under huge pressure to take the match to a tie-break, and it was he who found double six with his last dart in hand in the 23rd leg for a decisive break of throw and a 12-11 lead.

A nervy leg from both players followed, but after Van Gerwen missed the bullseye for an 86 checkout, Durrant stepped in to find double top at the second attempt to raise the roof in an emotion-filled Winter Gardens.

Durrant will now meet former World Matchplay champion Wade, who secured his 11th quarter-final appearance in his 14 Blackpool appearances with a hard-fought 13-11 win against Mensur Suljovic.

A see-saw affair, which saw the lead change hands seven times, saw both players miss a handful of darts each in the opening four legs before Wade pulled out a 134 finish to take a 3-2 lead.

Neither player was able to open up daylight from their opponent, but with Suljovic throwing for a 9-7 lead, Wade clinically took out 141 to restore parity at 8-8.

The battle went all the way to a tie-break and it seemed last year's runner-up Suljovic was going to make a perfectly-timed dash to the finish line with a break of throw to go 11-10 up, only for Wade to keep his cool and win three consecutive legs to advance to the last eight.

Anderson got off to the best possible start with a clinical 130 finish at the end of a 12-dart leg, but King replied with three doubles from three attempts, including a 122 checkout, to go 3-1 up.

The next two legs also went King's way, before the tide turned in Anderson's favour as the two-time World Champion won six of the next seven legs to take a 7-6 lead.

The game was finely poised at 8-8 before King struck a decisive 14-dart break of throw to regain the lead, and then won the last two legs in 30 darts to book his place in the quarter-finals of a televised event for the first time in three years.

King's next assignment will see him take on Michael Smith, who reached the quarter-finals for the first time in his career thanks to a nail-biting 12-10 victory over Max Hopp.

Hopp started the better in the battle of the former World Youth Champions as he took a 4-1 lead, before Smith nailed a 130 checkout to start a run of five successive legs to go 6-4 in front.

German number one Hopp stopped the rot and later fired in an 11-dart break back to level it up at 7-7.

Smith broke straight back, only for Hopp to reply in kind in the nip-and-tuck contest, before the next four legs went with throw to take the match to a tie-break.

After Hopp missed a dart at double top, Smith found the same target with his last dart in hand to break throw, and then smashed in his sixth 180 of the contest on his way to a 13-darter to wrap a thrilling victory.