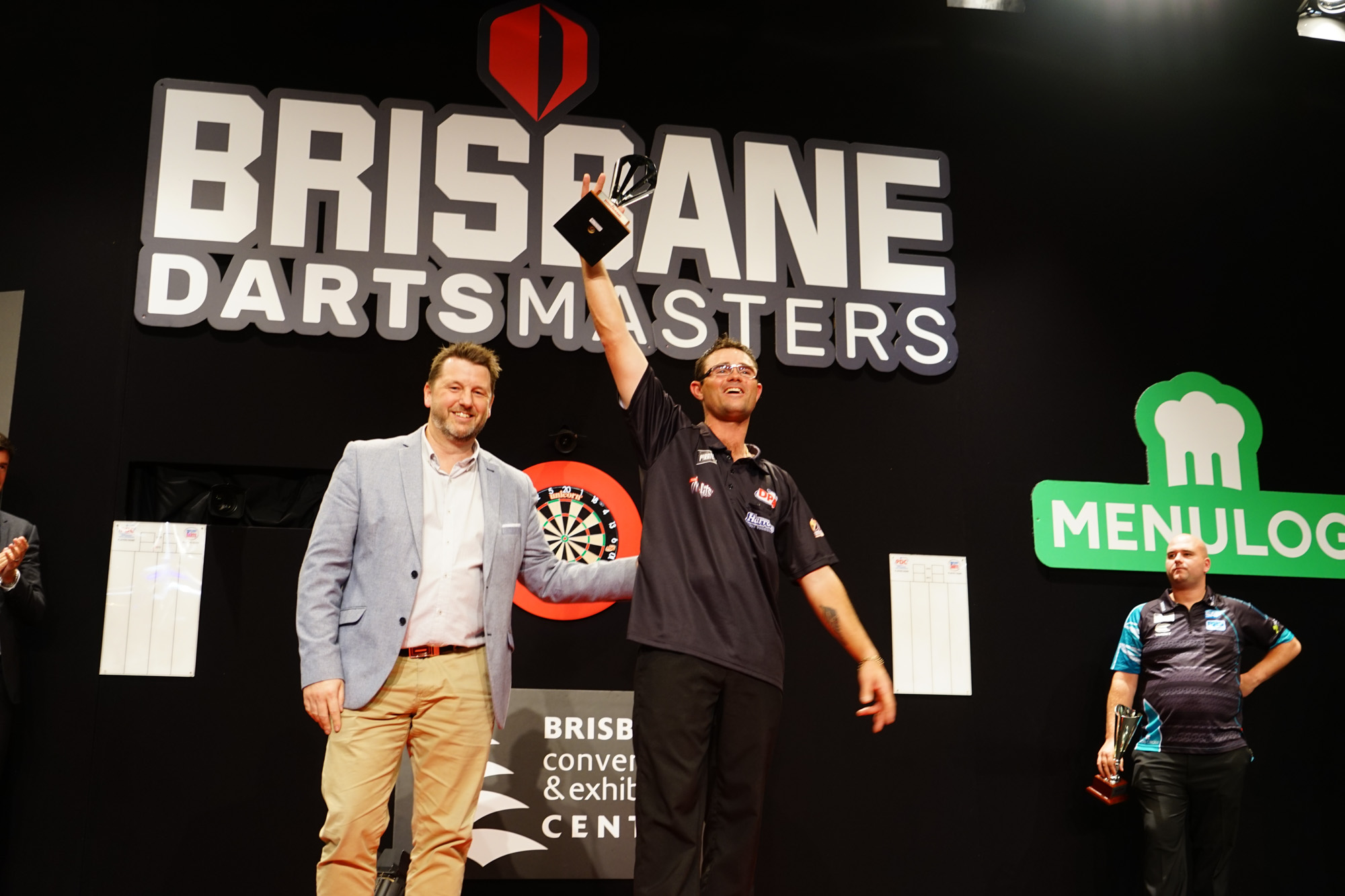 The 2019 Brisbane Darts Masters in Association with Pirate Life came to a dramatic conclusion on Saturday night with Damon Heta defying the odds to claim a first PDC title, beating Rob Cross in a last leg decider at the BCEC.

Heta, who was celebrating his 32nd birthday, became the first Australian to make a final of a World Series event since Kyle Anderson and Corey Cadby contested the 2017 Auckland Darts Masters, and the first to do so in his home country.

Cross who had beaten World number one Michael van Gerwen in the previous year’s final improved his unbeaten record in Brisbane until clashing with the unfancied Heta in the decider.

The final began with Cross opening up a 3-1 lead including an 11-dart break of throw in the fourth for a two leg advantage.

Heta, then punished Cross for missing six darts at a double to break straight back before taking out his second 164 finish of the tournament to draw level.

The pair then traded throw until what seemed a crucial break came in the tenth leg with Cross taking out 90 on double 18 to go 6-4 ahead and within two legs of the title.

Heta, who tops the DPA’s Order of Merit, wasn’t done there though as he immediately broke back and held throw to level, to put the pressure back on Cross.

The former World Champion stood up to the test initially though as he held to go one leg closer to retaining his title but once again the Australian fought back to take it to a decider, despite facing a match-dart from Cross.

The final leg saw Heta eventually pin double 16 to claim what seemed an unlikely title and delight the crowd in Brisbane.

“It’s unexplainable. I have just grown throughout this whole tournament. I have worked hard for this and it’s paid off in the end and I am just super stoked,” said Heta after the final.

“I have got to pinch myself just to make sure it’s happening, I am lost for words. I know what I can do and how good I can be and today I showed the world.

“To do that in front of an Australian crowd was amazing and hopefully I’ll be able to come over to the UK soon and when I do people better watch out.”

The work began for Heta as he took on Gary Anderson, who had demolished fellow Australian Corey Cadby the night before.

Heta didn’t let reputation stand in his way though as he punished the Scot for missing a staggering 24 darts at doubles throughout the match to seal a 8-6 win and move in to the last four.

Another Australian waited in the semi’s after Simon Whitlock whitewashed Kyle Anderson in the opening match of the night to confirm his place in the last four.

Whitlock began the game by racing in to a 3-0 lead and looked most likely to make his first televised final since the 2018 European Championships. However, Heta fought back to secure the win and move in to the final with Rob Cross.

Earlier in the day Cross began his charge for a second consecutive title in Brisbane with an 8-4 win over Raymond van Barneveld in the quarter-final, averaging 95.

Cross’ semi-final opponent was Daryl Gurney, the man he beat at the same stage in the World Matchplay just two weeks before and the outcome was the same, with Cross running out an 8-3 winner on this occasion.

The semi-final clash saw Cross average 105 and hit 50% of his attempt at doubles, including a 170 finish to progress to the final against Heta.

Gurney had earlier defeated world number one Michael van Gerwen 8-5 to set up the semi-final encounter with eventual champion Cross.

Despite the loss Cross yet again showed his class and backed up his victory at the World Matchplay with a run to the final in Australia.

“I’ve played well this week and been feeling good since Blackpool but fair play to Damon he deserved it tonight.

“I had my chances but that means nothing if you don’t take them so I just have to say well done to Damon and prepare myself for Melbourne.”

The day belonged to Damon Heta though as the man from Perth secured his first televised PDC title in style and with that putting Australian darts firmly on the map.

The fourth World Series event of 2019 and the second of the tour Down Under will see some of the world’s best players head to the Melbourne arena for the third staging of the Melbourne Darts Masters on August 16-17.

Limited tickets for the Melbourne Darts Masters are available at Ticketek.com.au.

The event will be broadcast live on Fox Sports across Australia and worldwide through the PDC's international broadcast partners, as well as through PDCTV-HD for Rest of the World Subscribers (outside of the UK, Ireland & Netherlands).

UK TV coverage on ITV4 will be from 7pm BST.