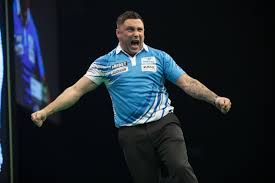 Gerwyn Price came out on top of an incredible final against Krzysztof Ratajski to win Players Championship 27 in Dublin on Friday.

In the first of two ProTour events taking place at the Citywest Convention Centre ahead of Sunday's start to the BoyleSports World Grand Prix, Price and Ratajski renewed rivalries in the final having previously shared the stage in memorable contests at the UK Open and Players Championship Finals.

After Polish number one Ratajski took the opener, Price reeled off the next six legs in devastating style, ending his flurry with a 12-darter to make it 6-1.

With Grand Slam of Darts champion Price seemingly cruising to an eighth PDC title of his career, Ratajski stopped the rot with a 170 checkout which lit the blue touch paper for a remarkable comeback attempt.

This time it was Ratajski's turn to reel off six legs without reply, with the 12th leg seeing Ratajski fire in a perfectly-timed 180, just his third of the day, to leave 36.

After Price failed to take out 120, Ratajski found a last dart in hand double nine to level, before finding the same target in the next to go within one leg of completing the great escape.

However, Price dug deep and stopped the rot with a 121 finish to take the enthralling contest to a deciding leg.

After Ratajski missed a dart at double 16 for the match, Price stepped in to find double top with his last dart for a 74 finish to clinch his fourth PDC crown of 2019.

Before the final, Ratajski was on a run of 11 games without defeat, having picked up his first European Tour title at the Gibraltar Darts Trophy last Sunday.

World number six Price's victory in the final ended that sequence along with Ratajski's record of never having lost a senior PDC final.

Elsewhere, Players Championship 27 was also significant for Ryan Joyce, who reached his first PDC semi-final since February 2018 and missed a match-dart to defeat Price in their final four meeting.

Spanish number one Cristo Reyes continued his return to form with back-to-back quarter-final berths, while Robert Owen made his first quarter-final appearance since the 2018 UK Open

The second day of the ProTour double-header from the Citywest Convention Centre will see 128 players in action on the eve of the BoyleSports World Grand Prix, with action from Players Championship 28 streamed live on video.pdc.tv.