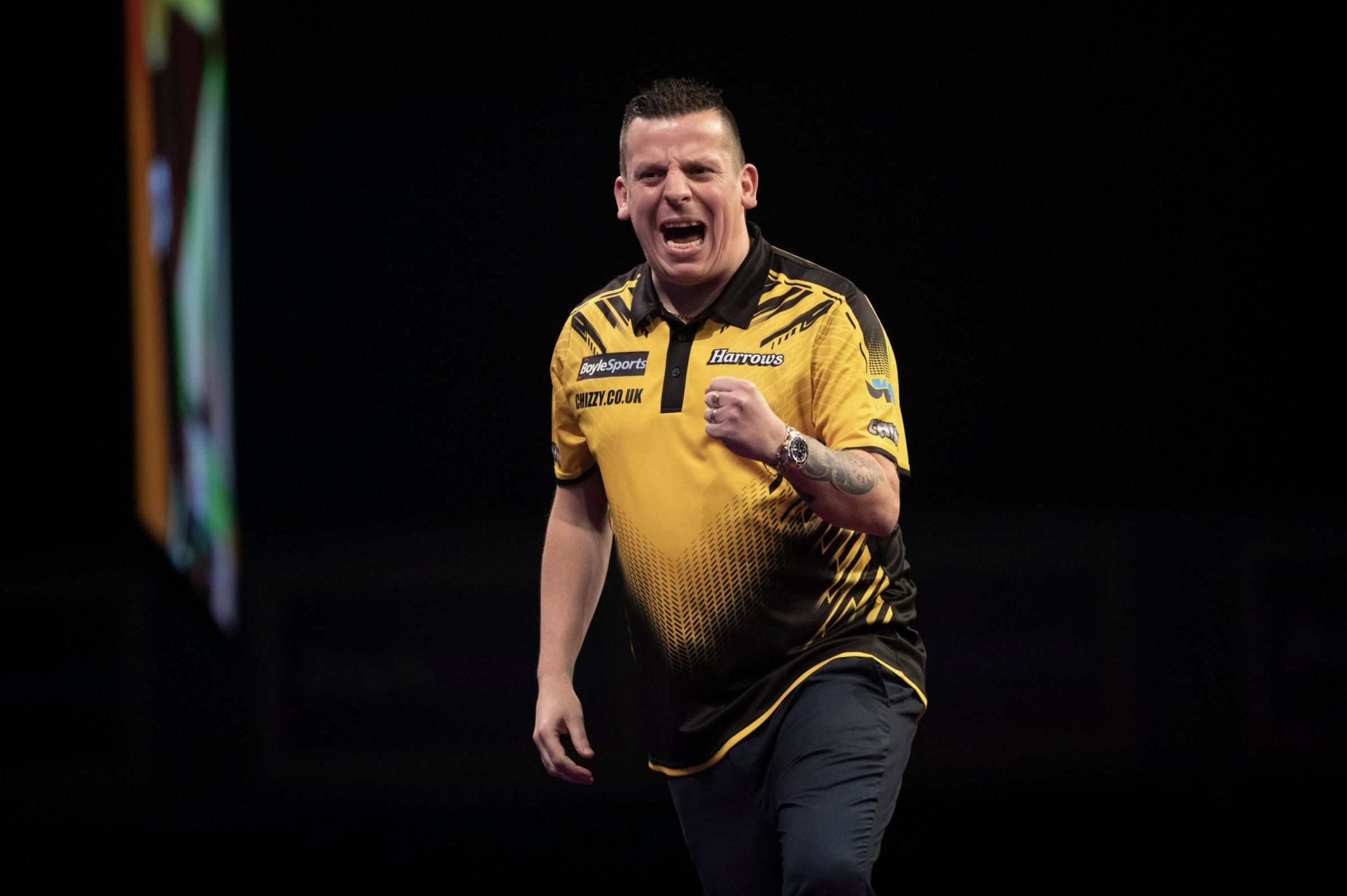 Michael van Gerwen, Dave Chisnall, Glen Durrant and Chris Dobey will star in the semi-finals of the 2019 BoyleSports World Grand Prix after coming through their quarter-final ties in Dublin on Thursday.

A thrilling night of darts at the Citywest Convention Centre saw reigning champion Van Gerwen continue his bid to retain the title for the first time with a hard-fought 3-1 win against Mervyn King, and he will now face Dobey, who continued his dream debut with a 3-2 triumph over Ian White.

Chisnall overcame Nathan Aspinall 3-1 in a high-quality affair to set up a meeting with Glen Durrant after the World Matchplay semi-finalist edged out Jermaine Wattimena 3-2 to book a spot in Friday's last four.

The repeat of the 2012 final between Van Gerwen and King was the star attraction on Day Five of the double-start event at the Citywest Convention Centre, with King pushing four-time champion Van Gerwen to produce some of his best darts.

Van Gerwen took a 1-0 lead after two set darts went begging for King, who then matched the Dutchman's 170 checkout with the maximum finish himself to level at 1-1 in sets.

The third set went the way of Van Gerwen 3-1, but King's reply was immediate in the opening leg four as he raised the roof with a 132 checkout.

With King 2-1 up in the fourth, he then missed a dart at double 18 to take the match to a deciding set and Van Gerwen took full advantage, pinning double eight to make it 2-2 before outscoring King in the set five decider, sealing victory on double top.

"I think it was a phenomenal game from both of us, but I proved why you should never write off MvG," said Van Gerwen.

"He pushed me through the roof, he never gave up and I think we saw Mervyn at his best tonight. He's a top class player with an incredible talent.

"Now I will have a good night's rest and I will be ready for tomorrow. I think the longer format will favour me in my game with Chris."

Van Gerwen's next test will come from rising star Dobey, who continued his sensational impact in his first World Grand Prix appearance with five ton-plus checkouts in a win over White.

A rampant start from Dobey saw him whitewash White in the first set, sealing it with a 132 checkout, before a strong response from White saw him take the second set 3-1.

A stunning 156 finish from Dobey put him within a leg of the semi-finals, and the Geordie sealed his place in the final four with another 100 checkout in the next leg to secure his first PDC televised semi-final berth.

"It's great to go out there and show what I can do. I felt great up there, I was a bit patchy at times but I finished well," said Dobey.

"It's put me into my first semi-final and to beat the number ten in the world is great, especially after beating Gary [Anderson] too.

"I've got all the belief in the world and I'm playing well enough to go all the way but I'll just focus on the semis now, whoever I play. I will never look past my next game and I will prepare myself like I would for any other game."

2013 runner-up Chisnall produced a strong display, hitting doubles at crucial moments to get the better of UK Open champion Aspinall.

Chisnall looked to be running away with the game as he took the opening two sets, despite Aspinall missing two darts for the first.

The third set went to a deciding leg, and after Chisnall missed darts at double top and double ten to close out victory, Aspinall stepped in to pin double ten and keep his hopes of a dream Dublin debut alive.

Undeterred by his missed chances to seal the deal, Chisnall continued his heavy scoring in the fourth set, winning it 3-1 to reach the semi-finals for the second time in four years.

"I'm over the moon, I'm much happier with how I played tonight compared with my last game," said Chisnall, the 2013 World Grand Prix finalist.

"But I dug in and I managed to get one over him today and now I'm feeling good about my game heading into Friday."

Three-time Lakeside Champion Durrant completed the semi-final line-up with a hard-fought win over Wattimena to continue his dream first year on the PDC circuit.

Another slow start from Durrant saw him whitewashed by Wattimena in set one, with the Dutchman nailing a 154 checkout in leg three.

Despite once again failing to produce his best darts, Durrant stuck to his task and won six of the next eight legs to take a 2-1 lead in sets.

Wattimena, who took the scalps of Adrian Lewis and Peter Wright to reach the last eight, fought back to win the fourth set 3-1 and take the tie to a decider.

Dutch number two Wattimena edged closer to the biggest win of his career by taking the opening leg, but Durrant held firm, winning three legs in succession to book a place in his second televised PDC semi-final.

"It's crazy that I'm in the semi-finals," Durrant admitted. "I've got that will to win inside me and I somehow managed to find the knockout blow. I've got that fight and a will to win.

"I honestly don't know how I'm winning, I don't know where my scoring's gone.

"Hopefully on Friday I can settle, maybe winning the first set will help my performance so I'm not constantly battling to stay in it."

Durrant and Chisnall will star in Friday's opening semi-final at the Citywest Convention Centre from 1900 BST, with Van Gerwen then taking on Dobey in the second contest of the evening.