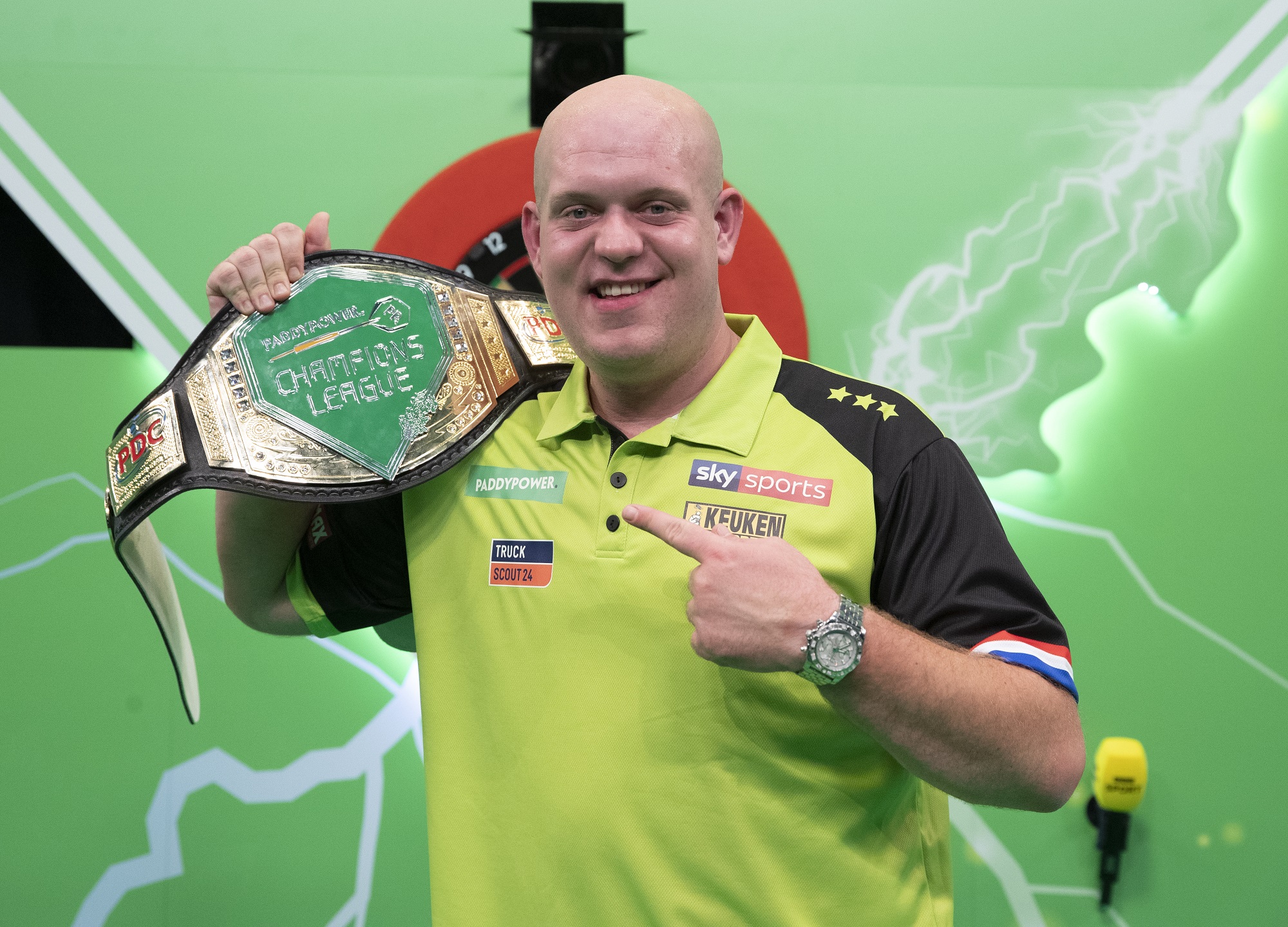 Michael van Gerwen claimed the Paddy Power Champions League of Darts title for the first time with an incredible 11-10 comeback win over Peter Wright in Sunday's final in Leicester.

The success sees Van Gerwen complete a "Green Sweep" of PDC Premier televised events, with the Champions League having been the only gap in his amazing roll of honour.

Van Gerwen topped Group A at the Morningside Arena with wins over James Wade, Michael Smith and Gary Anderson, before edging past Gerwyn Price 11-10 in an outstanding semi-final.

A dramatic final also went all the way, with Wright missing three match darts when leading 10-7 before the Dutchman reeled off four straight legs to claim glory.

"It's incredible for me," said Van Gerwen. "This tournament was on my bucket list and it's a really important one for me to win.

"This was a phenomenal weekend for me with a high standard of darts. Peter put me under pressure and I made it difficult for myself in the final.

"I missed a few darts on doubles here and there and I shouldn't have put myself in that position, but Peter missed a couple of clear darts to win the game and I took great advantage of that.

"I played well all the way through the weekend and did everything I had to do. I averaged over 100 in every match but I know I can improve and there's more in the tank.

"It gives me a lot of confidence because we have lots of big events coming up. It's nice to have so many tournaments on the calendar and I love to perform on stage, especially when I'm playing well and winning."

Van Gerwen's success maintained his record of never having lost a televised final to Wright, bringing back memories of the 2017 Premier League final where the Scot also missed match darts.

"When Peter had those three darts clear at double 12 I thought it was over, but then with the last dart he turned around and was looking really nervous and I stepped in," said Van Gerwen.

"In the Premier League final he missed darts to beat me and it happened again tonight. You can see with how he threw his [match] darts that he's worried about beating me and he's nervous, and that's a compliment to me.

"Peter's a phenomenal player and everyone knows that. We're going to have a lot more finals."

Wright said: "Michael won this one but I'll get him back next time. This is done and dusted now and I'll move on to next week and the European Championship."

Wright pushed Van Gerwen all the way in a final of the highest quality, with the Scot taking out a 156 finish in leg two only to see his rival respond with a 154 checkout to lead 2-1.

Van Gerwen also held a 3-2 cushion before four straight legs moved Wright into a 6-3 advantage, before the Dutchman hit back to trail 6-5 and 8-6 as the tension increased.

A 136 finish from Van Gerwen cut the gap to one leg again at 8-7, but Wright held his nerve on tops in the next two legs to move to the brink of glory at 10-7.

Three misses at double 12 allowed Van Gerwen to save the game before a 92 checkout reduced the arrears to 10-9 before double 16 took the game to a deciding leg.

Van Gerwen was first to a finish, and landed double 16 once again to complete a 14-darter as he wrapped up an amazing victory.

Price had won his Group B decider against Gurney 10-6 to win through to the last four on his Champions League debut, but was unable to claim his first career win over Van Gerwen with his agonising last four reverse.

"I'm gutted that I lost but I pushed Michael all the way," said Price, the reigning Grand Slam of Darts champion. "I thought I played pretty well but he showed why he's World Champion because he never gave up.

"I was confident coming into it and I just need the rub of the green now."

Smith had landed a 170 checkout as he defeated James Wade 10-8 to move into the last four from Group A on Sunday afternoon, but the World Championship runner-up was unable to recover from seeing Wright move 7-0 up in their semi-final.

Reigning champion Anderson saw his title defence end with three Group A defeats after he went down 10-4 to Van Gerwen in their tie, with the Dutchman coming from 2-0 down with finishes of 140 and 146.

Afternoon Session Round-Up
Peter Wright secured top spot in Group B with a high-quality 10-8 win over Rob Cross, with the world number two ending the tournament without a victory in the round-robin stage.

Wright followed up his two wins on Saturday by opening the contest with a 180, and he also landed an 11-darter and a ten-dart finish as he shared the opening six legs.

Cross broke to move 4-3 up with a 12-darter, only for Wright to take command with four successive legs, and though the 2018 World Champion hit back with a 140 finish as he levelled at seven-all, the Scot closed out victory.

Gerwyn Price powered into the semi-finals on his Champions League debut with a clinical win 10-6 defeat of Daryl Gurney in their decisive Group B clash.

Price's accuracy on tops helped him to establish a 5-1 lead as he took command, hitting the double four times from as many attempts in the opening stages of the contest.

Gurney fought back to trail just 8-6 with some fine darts of his own, but a key 89 checkout from Price moved him to the brink of victory before double ten sealed his place in the last four as the Group B runner-up.

Michael van Gerwen completed his Group A campaign with a third successive victory, defeating Gary Anderson 10-4 with a 101 average as he set up a semi-final with Gerwyn Price.

Reigning champion Anderson bounced back strongly from his two defeats on Saturday with a fine start, taking out 152 as he moved into a 2-0 lead.

Van Gerwen, though, took the next five legs without reply in a stunning burst to turn the tie on its head, taking out 140 for a 12-darter and two 13-dart legs in the process.

Anderson hit back with an 11-darter, but Van Gerwen won the next four to move to the brink of victory before completing the win with a 146 checkout.

Wade edged 7-6 up, but Smith punished a miss at double 18 to level and then took out 90 on the bull for a key break as he moved 9-7 up, before landing double ten to close out a 10-8 success.

Semi-Finals
Peter Wright booked his place in the Champions League final for a second successive year by racing past Michael Smith 11-5.

Wright opened the contest with a 128 checkout, punished four missed doubles from Smith in leg two and pulled clear with the aid of a 14-darter and a 161 checkout as he moved 7-0 up.

Wright, though, steadied any nerves with a 116 finish for a 12-darter before landing double eight to ensure his spot in the final.

Michael van Gerwen edged out Gerwyn Price 11-10 in a brilliant, dramatic semi-final as the world number one booked his spot against Wright in the decider.

Van Gerwen opened with a ten-darter and led 2-0 and 5-3 before Price took three successive legs to move ahead at 6-5.

The Dutchman regained the edge in a see-saw contest at 7-6 and 8-7 before finishes of 74 and tops put Price back into the lead at 9-8.

Van Gerwen finished 85 and a 13-darter to send the tie to a deciding leg at ten-all, and the World Champion showed his class in being first to a finish as he completed a 14-dart leg to seal his place in the final.