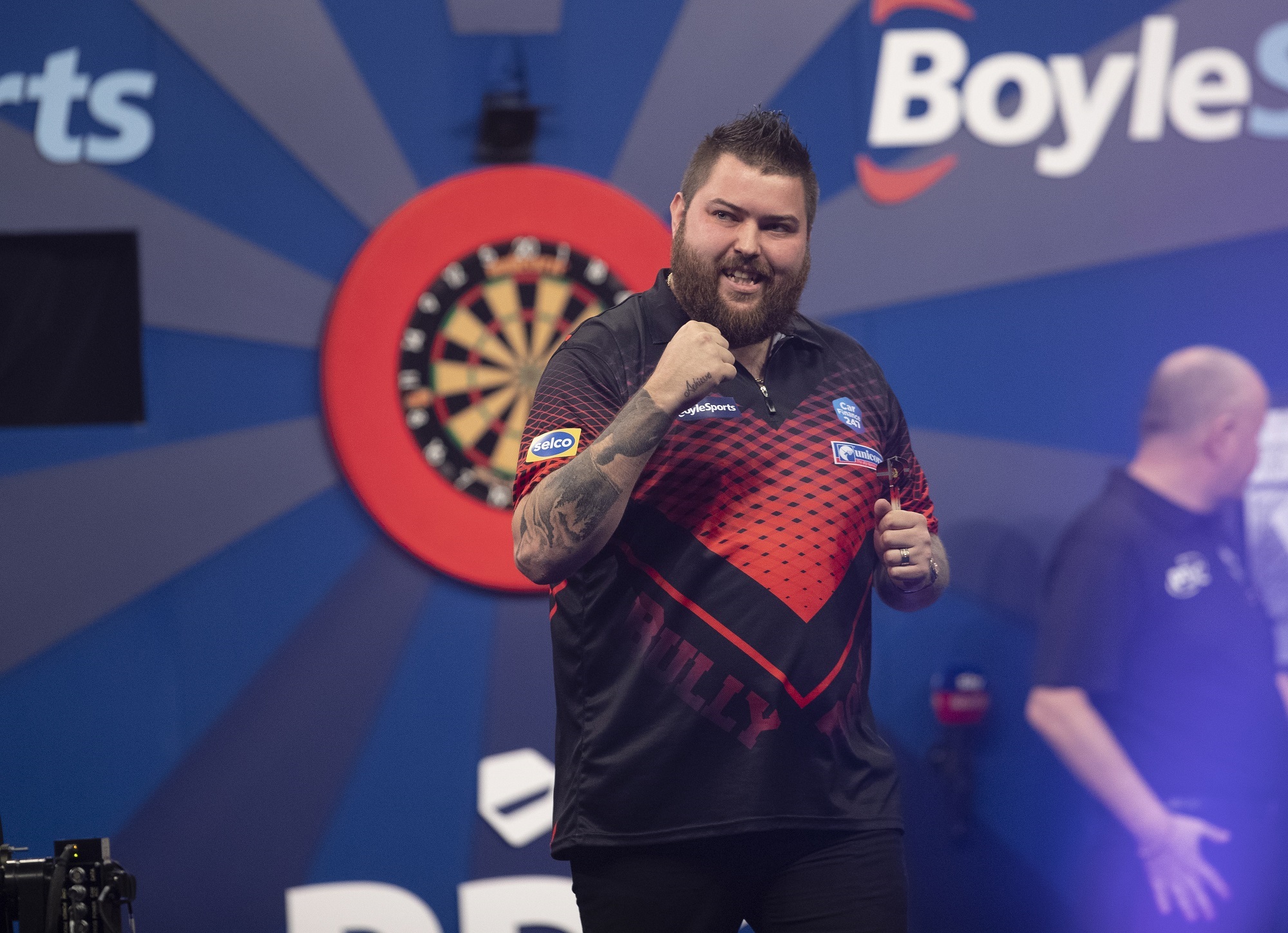 Michael Smith recorded the third highest average in BoyleSports Grand Slam of Darts history as he joined Michael van Gerwen, Dave Chisnall and Gabriel Clemens in qualifying for the knockout stages in Wolverhampton on Sunday.

Smith averaged 113.62 in a brilliant 5-1 win over Nathan Aspinall as the world number three ensured his place in the last 16.

Smith continued his superb start to the event, following up Saturday's victory over Glen Durrant with a second win in as many days, meaning that the Lakeside Champion and Aspinall now face a shoot-out on Monday.

"It was a massive match and I knew I had to win, so I'm pleased to play so well," said Smith. "Nathan said I was phenomenal and I felt I owed him one for when he beat me in Las Vegas.

"It was a big game and I'm glad I did myself proud and got the win, and I'm safe. As long as I won the match that was the most important thing for me - the record average would have been nice but records don't win you tournaments.

"This event is a target for me because I'm desperate to win a TV title. That's been my aim this year."

Durrant bounced back from his opening loss to Smith with a dramatic 5-4 win over Martin Schindler, the young German who now cannot qualify.

Schindler led 4-2 but paid for missing two match darts at tops as three-time Lakeside Champion Durrant produced a pair of 84 finishes to keep his hopes alive before winning their deciding leg.

Three-time Grand Slam champion Michael van Gerwen stormed back from 2-0 down against Adrian Lewis to qualify from Group A with a 5-2 victory.

"I've not been at my best but my darts didn't let me down and I found an extra gear when I had to against Adrian," said Van Gerwen. "He tried to push me, especially at the beginning, but I did the right things at the right moments.

"I'm through to the next round and I can look ahead to that, but I'll still concentrate on the last group match. Ross Smith beat me in the European Championship and of course I want to put that right."

Kent's Smith cannot now qualify after losing out 5-1 to Jim Williams, with the BDO World Trophy winner having finished four doubles from as many attempts - including checkouts of 122 and 118 - as he opened up a key 4-0 lead to keep his hopes alive.

Chisnall, meanwhile, ensured his qualification from Group E, defeating Rob Cross 5-3 to force the world number two into a shoot-out with Jamie Hughes on Monday night.

"I'm over the moon to win and be through," said Chisnall, the World Grand Prix runner-up in Dublin last month.

"When you play the world number two you know you've got to battle and I did, it wasn't pretty but I got the job done. I'm here to get as far as I can and it would be lovely to go one better than in Dublin."

Hughes produced a strong display to open his account in Group E, landing four 180s in a 5-1 win over Lisa Ashton, eliminating the four-time Women's World Champion in the process.

Germany's Clemens continued his superb Grand Slam debut as the qualifier defeated Daryl Gurney 5-4 to secure his progression to the last 16, hitting a 12-darter in the deciding leg of a high-quality contest.

"I have no words," said an overwhelmed Clemens. "Daryl us a fantastic player and to beat him on this stage is crazy."

Gurney now faces a shoot-out with Brendan Dolan on Monday night, after the 2011 World Grand Prix finalist came from a leg down to defeat Richard Veenstra 5-1, knocking out the Dutchman.

Thornton had looked on course to remain unbeaten after moving 4-3 up, but failed to give himself a dart at a double on an 82 finish as Price forced a deciding leg, before missing doubles 12 and six to allow the Welshman in to complete a 94 finish for a 12-darter in snatching the points.

"I can't ask for any more than two wins from two and I just need to concentrate on my own game on Tuesday and try to win," said Price, who meets Dimitri Van den Bergh in his final group match.

"I was chasing Robert all the way through the game and he was hitting trebles for fun. I didn't think I was going to get a chance to break him, so I'm happy to get over the line.

"It's tough to get through the groups but I'm feeling confident. I'm trying to play a different game and I don't think it's working yet, but I'm trying to stay composed. I'll go out and try to enjoy myself against Dimitri.

"I want to perform well and hopefully I can pick my game up, improve my scoring and not ride my luck too much because it's going to run out sooner or later."

Two-time finalist Gary Anderson averaged a superb 105.08 as he claimed a second victory in Group D, defeating William O'Connor 5-3 despite the Irish ace taking out a 158 finish.

Darren Webster bounced back from Saturday's defeat to Anderson with a 5-2 win over Dave Parletti, taking out a key 125 checkout of bull-25-bull on his way to a first Group D victory.

James Wade survived two missed match darts as he came from 4-2 down to defeat Ian White 5-4, with Steve Lennon coming from 3-0 down to defeat Wesley Harms 5-4 by taking out a stunning 167 finish in the deciding leg.

Wade now sits in pole position in Group B with two wins ahead of his final group tie with Lennon, while White meets Harms on Tuesday in another quartet where all player could still qualify.

Noppert bounced back from his loss on Saturday with a strong display to defeat Warren 5-1, while Wright landed three ton-plus checkouts during his 5-2 win over Harrington.

Tickets are available through ticketmaster.co.uk and SeeTickets.