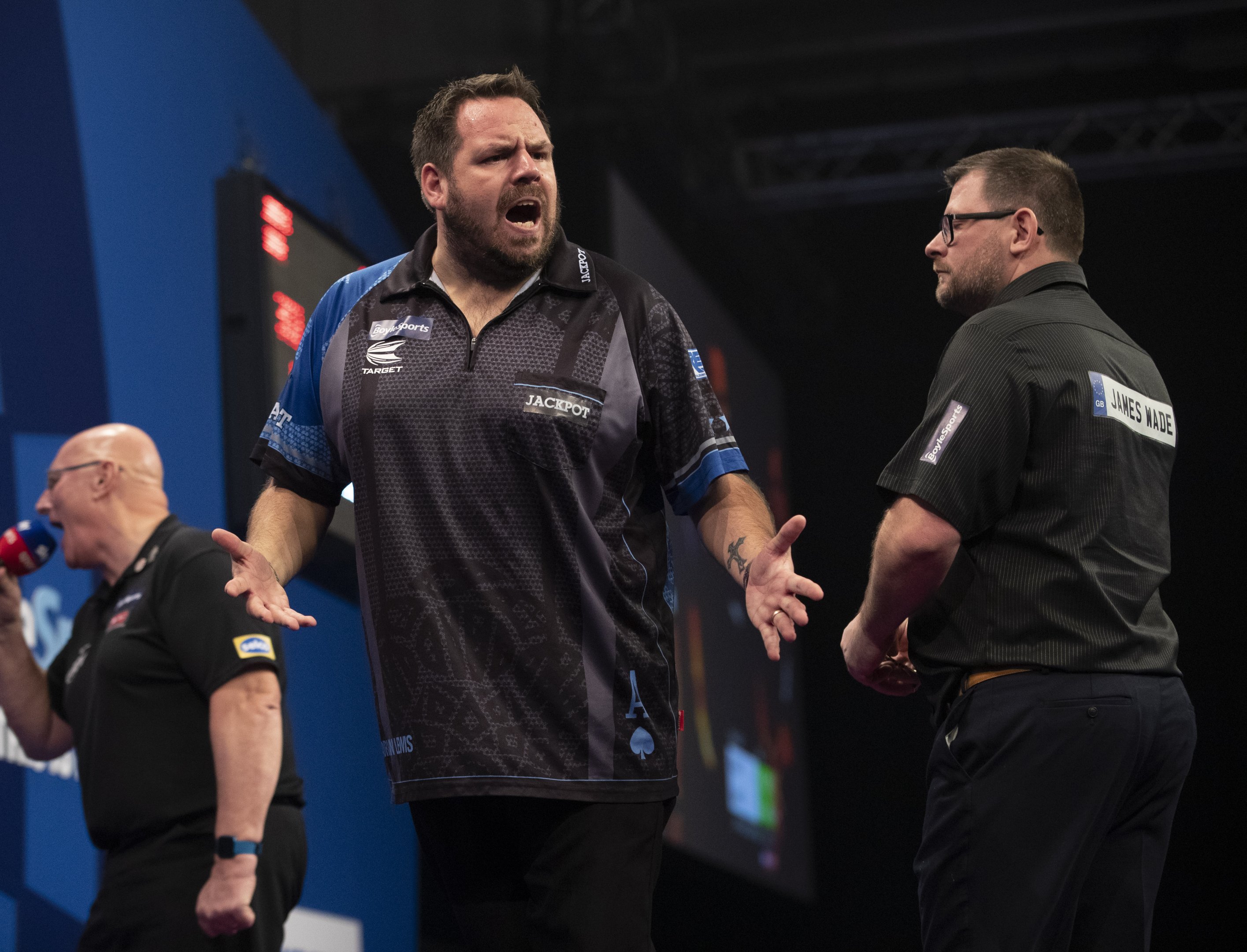 Adrian Lewis produced a stunning comeback to defeat James Wade and reach the quarter-finals of the BoyleSports Grand Slam of Darts in Wolverhampton on Thursday.

Two-time Grand Slam semi-finalist Lewis looked down and out with Wade 9-6 up, only for Lewis to find his best form when he needed it most to claim a dramatic victory.

Lewis was visibly delighted with the win over long-standing rival Wade, with the prospect of a first ranking TV quarter-final since 2017 now on the horizon.

“I’m so happy to win that match, James and I have got a lot of respect for each other and to be back in a quarter-final is great,” said Lewis.

“I didn’t mean to turn the bull down, I thought he was on 181 not 161, I can be a bit dopey sometimes, thankfully it didn’t come back to bite me in the end.”

The match began with both players trading holds of throw before Wade stole an advantage in leg ten with a break.

The former Premier League champion then extended his lead moving 9-6 clear and within a leg of the last eight before Lewis began his fightback.

Two-time World Champion Lewis broke back in leg 17, taking out 85 to put the pressure on Wade.

With the score at 9-8 and Lewis throwing to level, he declined a shot at the bullseye with Wade sat on 161 for the match. Wade then hit the requisite trebles before narrowly missing the bull for the match, allowing Lewis to take out 32 and take the game to a decider.

A stunning 110 checkout sealed the win for Lewis, who hit four 180s in the last four legs and nine in total in an exciting display.

The Englishman will now face world number one Michael van Gerwen in the next round after the World Champion survived a slight scare against Ian White before progressing with a 10-7 win.

Van Gerwen began the brighter of the pair, breaking early and moving in to a 3-1 lead, before a stunning 143 checkout from White brought the match back on throw.

Another ton-plus finish, this time 110, saw White break again and take a 4-3 lead, eventually extending to 6-4.

This seemed to anger Van Gerwen, who cut a frustrated figure on stage, but the Dutchman then won six of the next seven legs to seal his passage to the quarter-finals.

“I know Ian will always give me a chance, he is a phenomenal player but it is hard to play so well in a long format so I just had to be calm and not make any mistakes.

“My belief is always there, even when I am in a little bit of trouble. This is an important win for me.”

Gary Anderson set up a mouth-watering repeat of the 2018 Grand Slam final with Gerwyn Price after he beat fellow-Scot Robert Thornton 10-8.

A scrappy encounter saw both players struggle to show their best game, with Anderson missing 23 darts at doubles during the match.

Thornton was also left to rue missed opportunities, having taken a 4-1 lead in to the first break only for Anderson to win five on the spin to take the advantage.

The crucial break of throw came in the 17th leg, with the scores tied at 8-8, as Anderson pinned tops to give him the chance to throw for the match.

The former World Matchplay Champion missed five match-darts in a leg that also saw Thornton miss the bullseye to level but it was Anderson who progressed to set up the quarter-final clash with Price.

“I felt good again in patches today but every time I play well in practice it’s completely different on the board.

“The way I’m going at the moment I have no idea what’s going to come out but I can guarantee you that I will be doing my absolute best on Saturday night,” said Anderson, who takes on Price for only the second time since they clashed in Wolverhampton last year.

“We’ll see how we go but hopefully he brings the best out of me. I’ll be giving everything so let’s see what happens.”

Defending champion Price cruised past Darren Webster to take his place in the quarter-finals in Wolverhampton, securing a 10-1 win with an average of almost 100.

The Welshman only allowed his opponent three shots at doubles throughout the match and controlled the game from start to finish.

“Darren was a bit flat tonight but I still had a job to do and I’m really glad I played well," said Price.

“He told me I was ruthless and I take that as a massive compliment because he is a class player.

"I’m really happy to get the job done and be in the quarter-finals."

Day Seven will be broadcast live on Sky Sports in the UK, on PDCTV-HD for Rest of the World Subscribers and through the PDC's worldwide broadcast partners including DAZN and RTL7.