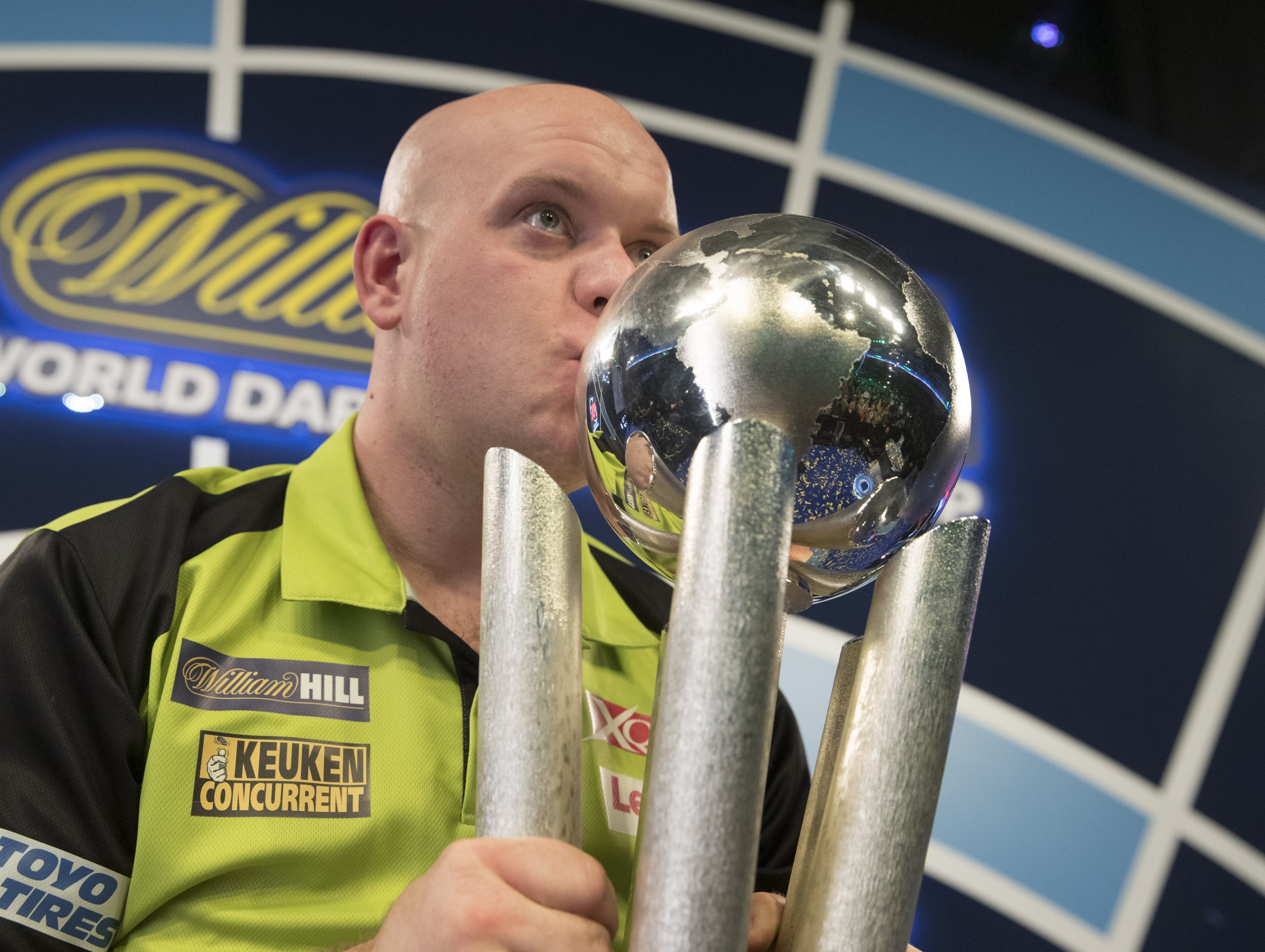 Darts' biggest event will see 96 players competing across 28 sessions of action from December 13-January 1 for The Sid Waddell Trophy and £2.5m in prize money.

The festive feast of darts begins on Friday, with former World Championship semi-finalist Klaasen facing Northern Ireland's Burness in the opening tie for the right to face Van Gerwen in the final game of Day One.

Van Gerwen tasted victory on the Alexandra Palace stage for a third time 12 months ago, but the world number one insists there is no extra pressure on him to claim back-to-back World Championship titles for the first time.

A winner of seven TV titles in 2019, Van Gerwen could pocket £1m in World Championship prize money in the space of 12 months if he clinches the £500,000 top prize for a second successive year.

"People love to make up a story somehow so it doesn't bother me that I've never defended it," said Van Gerwen, who is the 5/4 favourite to lift The Sid Waddell Trophy with title sponsor William Hill.

"They said it too about the World Grand Prix and I defended that this year, so I won't be getting involved in anything like this.

"I have a big target on my back and when you're doing well all the time a lot of people don't want you to win.

"I showed some weakness in the summer but then to bounce back feels even better, I love proving people wrong when they doubt me.

"If I'm at my very best the other players cannot beat me, but you have to show it on the stage and you can't make mistakes.

"Whoever is on my path I want to destroy, simple."

The first round will be played across the opening 11 sessions, featuring 32 qualifiers from the ProTour Order of Merit - based on prize money won across 43 non-televised events in 2019 - and 32 International Qualifiers.

Among the players in round one action is five-time World Champion Raymond van Barneveld, who will face American veteran Darin Young in the opening game of the Dutch legend's farewell tournament before retirement.

"It's been a really hard last year, a disaster year you could say," admitted Van Barneveld, who opens his challenge on Saturday.

"There have been some games where I play well and I think 'I can still do this', but in the next match it just doesn't happen and I don't know why. That's why I'm retiring, I can't take the pain anymore.

"I still have the vision that I've saved the whole year to play well at the World Championship and hopefully it's going to be a good run.

"Is it realistic to say that I'm going to lift this trophy? No, but the belief is still there.

"I will only be happy if I can lift that trophy, but if you offered me a runner-up spot right now then I would take it."

Van Barneveld is one of two players to hit two nine-dart finishes at the World Championship, and if a player hits two perfect legs at this year's event they will receive a £100,000 bonus.

Each session of first round action will also feature a second round clash, with the 32 seeded players waiting to face the first round winners.

Among the seeds and highly tipped to go far in just his sixth World Championship is world number three Gerwyn Price - who has never previously won past the last 16 at Alexandra Palace.

The Welshman's best year in PDC darts, which included the retention of the Grand Slam of Darts title and two other televised finals, has led to him being touted as a potential winner of the World Championship on New Year's Day.

"I just want to make sure I win my first game at the Worlds because as everyone knows I don't have the best record there," admitted Price, who awaits the winner of the game between William O'Connor and Marko Kantele.

"I just want to get through my first game in and then anything can happen, the first round is always the hardest but I'll give it a good shot.

"My goal is to win my first game, have a decent Christmas and then enjoy being in the tournament rather than just watching it."

One of the 22 debutants at this year's event is Glen Durrant, who is hoping to crown a ‘dream’ first year in the PDC with the biggest title of all.

Durrant, who won his PDC Tour Card in January after lifting his third Lakeside Championship, has reached the semi-finals of three televised events in his debut campaign and is now targeting the best possible end to the year.

“It’s been a dream first year and now I want the cherry on the cake with a good run at Alexandra Palace,” said Durrant, who will play Jose De Sousa or Damon Heta in the second round.

“I’m super excited, Ally Pally is going to be really special and in truth I’ve had one eye on it since the World Matchplay finished in July.

“I’ve done really well in my first year, whatever targets I’ve set I’ve exceeded them and to be honest the World Championship feels like a bit of a bonus for me.

“I’m very proud to be a seeded player in my first year, but I'm not taking anything for granted – it’s going to be the old cliché of one game at a time and that’s the way it has to be.

“I’m really determined to go out there and achieve something special while having a bit of fun too.”

The World Championship has changed the lives of many players, none more so than Nathan Aspinall, who is drawing on memories of last year's incredible run to the semi-finals to spur him on to further success.

A 500/1 shot going into last year's World Championship, Aspinall enjoyed a sensational Alexandra Palace debut and has since won the UK Open and US Darts Masters in his rise to 12th in the world.

"I've got some happy memories from last year and hopefully this year I can be more relaxed from the start, perform well straight from the off and hopefully go one further," said Aspinall, who will meet Andy Boulton or Danny Baggish in round two.

"I've had a really good year. The last couple of months hasn't gone how I'd have like it to have gone but I've still been playing well.

"I proved that with hard work, self-belief and dedication you can achieve a lot of things in the world of darts.

"I've always believed in my own ability but did I think I'd reach the heights that I have this year so quick into my career? Probably not, but I have done so you've got to build on that."

The third round is split either side of the Christmas break, with the fourth round being played on December 27-28 ahead of the quarter-finals across two sessions on December 29.

The semi-finals on Monday December 30 will be followed by the final on Wednesday January 1 as sport's first World Champion of 2020 is crowned after 16 days and 28 sessions of action.

A limited number of tickets are available to buy here.

Hospitality Packages are available here for some sessions.

A tie-break will be in operation in all round from the second round onwards, where the final set must be won by two clear legs. If the score reaches five-all, the 11th leg will be a sudden-death leg.