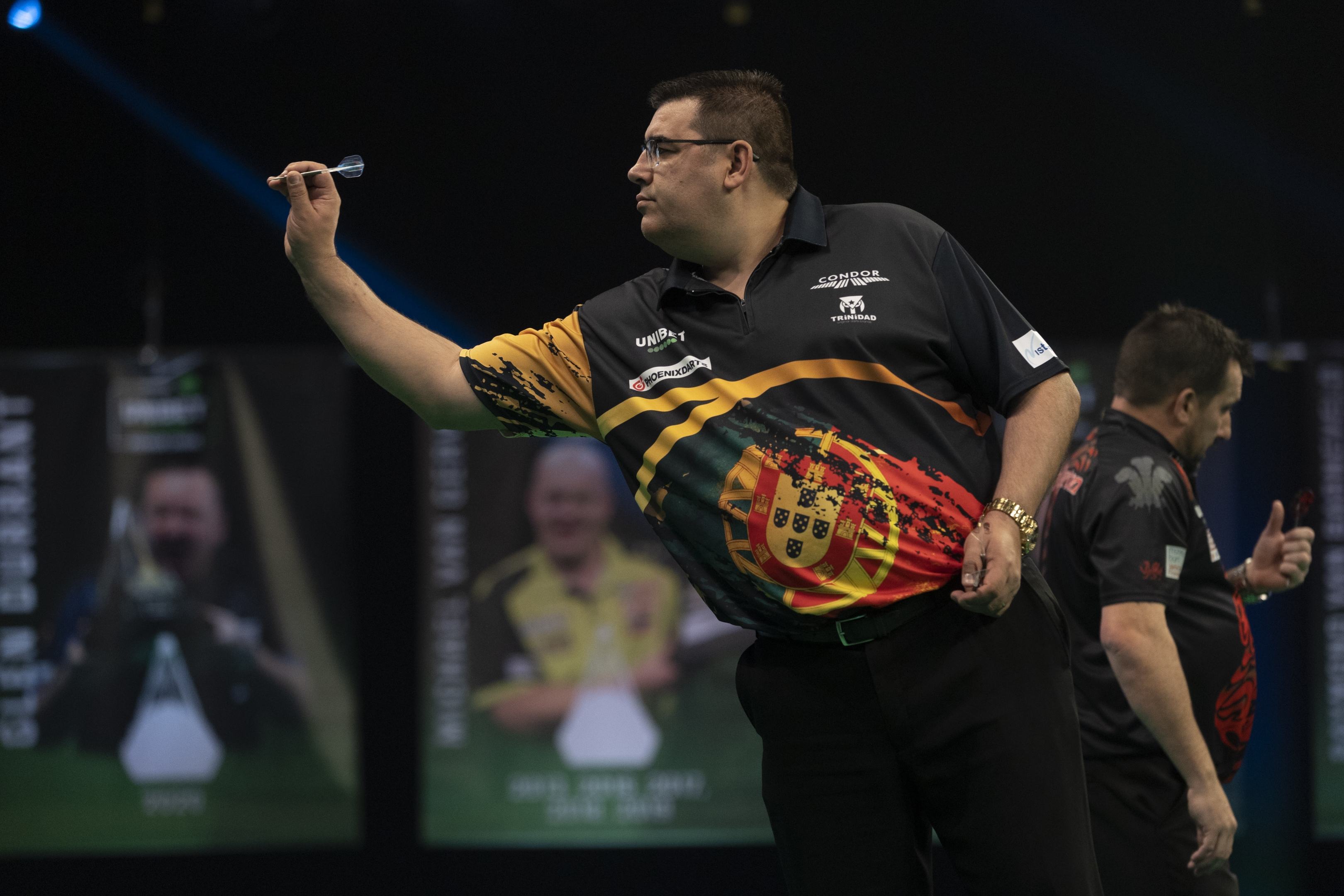 Jose de Sousa hit a nine-dart finish and a record-equalling 11 180s but was denied a first Unibet Premier League victory by Nathan Aspinall who held him to a draw in Milton Keynes on Thursday.

Night Four of the tournament saw De Sousa at his relentless best on the treble 20 at the Marshall Arena to equal the decade-long 180 record set by Gary Anderson against Simon Whitlock in the 2011 event.

He also landed a second nine-darter in as many days in the event - having been on the receiving end of a perfect leg from Jonny Clayton on Wednesday - after his achievement in the second leg against Aspinall, landing two 180s before taking out 141.

However, the Grand Slam of Darts champion had to settle for a second draw of his maiden Premier League campaign after Aspinall valiantly stayed in the contest to secure a point.

"It was an amazing feeling hitting the nine-darter," said De Sousa, who was left with mixed feelings following the match after missing the bullseye to take victory in the final leg.

"To break the 180 record is something positive for me too, my confidence is very good and I enjoy my darts.

"It was a shame for me not to win this match but I know if I keep playing at this level then a win will come soon.

"Yesterday I really had problems in my shoulder so I had to throw at the treble 19, but today I played very well in practice so I was able to score on the treble 20 and it went well!"

Michael van Gerwen missed the chance to go clear at the top of the table as he went down 7-3 to a ruthless James Wade, who picked up his first win of the season.

Five-time champion Van Gerwen was hotly tipped to win the match as he looks to reclaim the number one spot in the Premier League table which he held from 2013-2019 but was undone by a below-par display.

Wade pinned seven of his 13 double attempts, including trademark checkouts of 135, 121 and 120, to ensure the Dutchman was unable to gain a foothold in the contest.

"Michael didn't play how he can, maybe it was a little bit of luck on my behalf tonight," Wade suggested.

"I haven't played well at all in the first three games, so I'm not going to get too excited about tonight's result.

"I played well enough to win, and it was comfortable. I knew I would play well tonight and I'm happy to get my first win on the board."

Rob Cross inflicted a first defeat of the season on Night Three's nine-dart hero Clayton, running out a convincing 7-3 winner.

From 3-3, the 2019 runner-up reeled off the last four legs in efficient style to edge closer to ensuring his place in the competition beyond Judgement Night.

Dimitri Van den Bergh moved a point clear at the top of the table after maintaining an unbeaten start to his debut season with a 6-6 draw against Peter Wright.

The Scot fought back, winning three of the next four legs to level at 4-4, before the last four legs were all won on throw as Van den Bergh and Wright ended the contest with legs of 13 and 12 darts respectively.

The final game of the night saw Gary Anderson pick up his second win of the campaign, comfortably defeating reigning champion Glen Durrant 7-2.

Two-time Premier League champion Anderson hit seven of his 12 double attempts to shut the door on Durrant, who showed glimpses of improvement but is left seeking his first point of the year.

Durrant's defeat saw him become the first player since Simon Whitlock in 2014 to lose his opening four matches, as he aims to kick-start his season on Friday against Wade.

Night Five will also see Anderson take on Clayton in the opening game before Van den Bergh and De Sousa meet in the final game of the the opening 'block' of action.