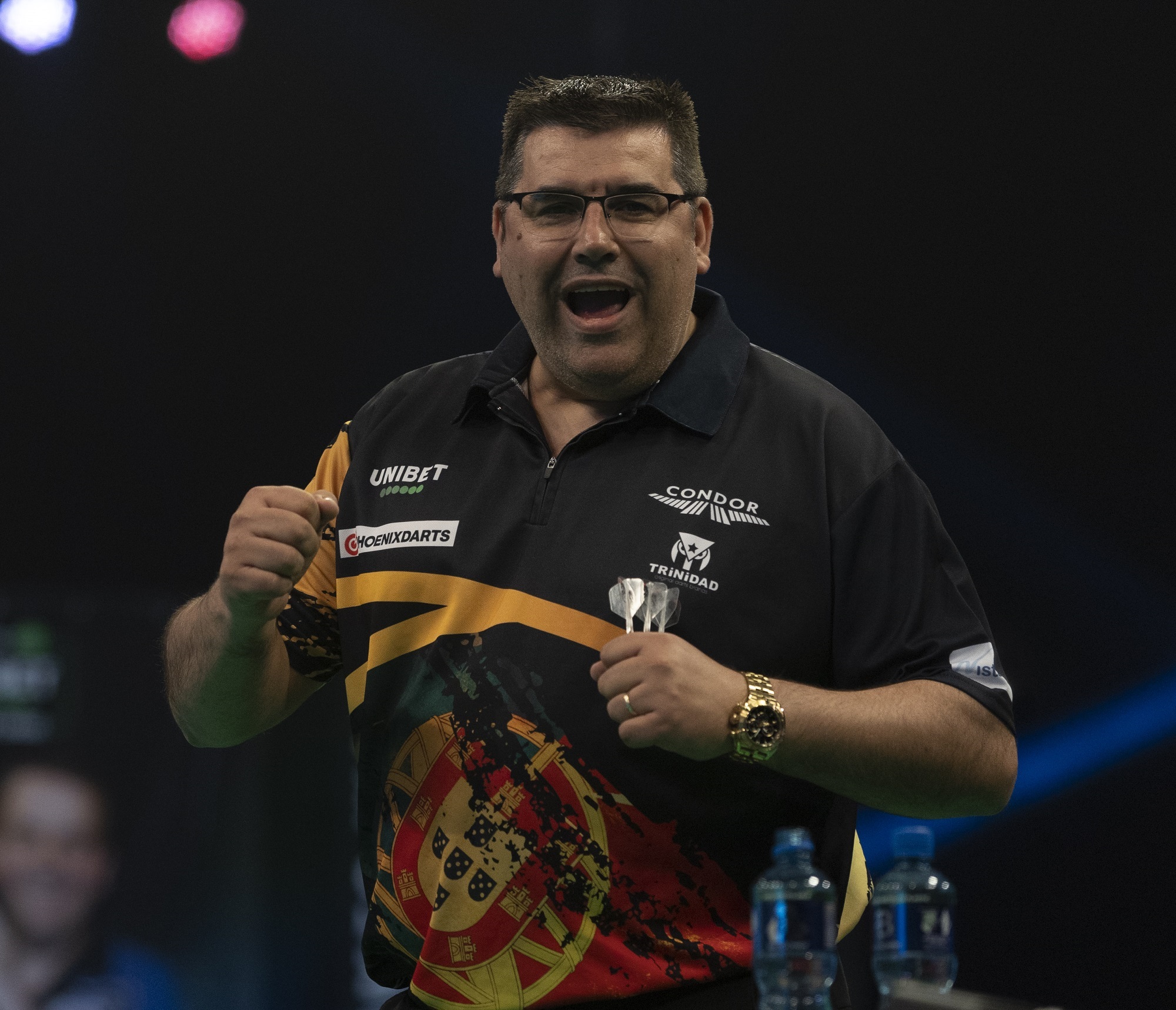 Jose de Sousa took victory on the opening day of PDC Super Series 3 with an astonishing 8-1 defeat of Luke Humphries in Saturday's final in Niedernhausen.

Jose de Sousa took victory on the opening day of PDC Super Series 3 with an astonishing 8-1 defeat of Luke Humphries in Saturday's final in Niedernhausen.

The Grand Slam of Darts champion produced one of the most dominant performances ever seen in a final as he averaged 114 to scoop the £10,000 title.

That display came at the end of an untouchable day of darts at the H+ Hotel, as De Sousa averaged over 96 in all six matches on his way to the win.

He opened the day with a 101 average against Maik Kuivenhoven and saw off Ciaran Teehan, Max Hopp and Gabriel Clemens to reach the quarter-finals before posting a 111 average in a 6-2 defeat of Brendan Dolan.

The Portuguese star then averaged almost 104 in his 7-2 semi-final win over Krzysztof Kciuk, and left Humphries with little chance in the final.

De Sousa opened the final with 180s in the opening two legs before Humphries broke back in leg three - a blow which seemed to spur on the Unibet Premier League ace.

He took leg four in ten darts to move 3-1 up, then fired in back-to-back 11-darters to pull clear before legs of 14 and 12 darts pushed him to the brink of a victory which was sealed on double ten in the next leg.

"This is a special moment," said De Sousa. "I played well but I think my doubles were the reason I got to the final, they helped me a lot today so I'm happy.

"Right now I'm feeling in great shape, and my triple 20s are easy to make, and when you make so many triples you come to the final.

"I'm very happy for my doubles today, it was so important for me to make my doubles. I came up in my percentage in my doubles so it's amazing for me.

"Today, the feeling was so good. This doesn't stop here and tomorrow I have another day, and I hope I can do the same."

Humphries reached his third final of 2021 as the former World Youth Champion chased his maiden senior title - but was again left to rue a master-class from his opponent.

He averaged 104 in seeing off Niels Zonneveld in round two and just short of 100 in his quarter-final win over Jason Lowe, while he also defeated Kevin McDine, Nick Kenny and Mervyn King.

The semi-finals saw him meet fellow former World Youth Champion Dimitri Van den Bergh, and he came from 4-0 and 6-4 down to snatch a 7-6 win to reach the final.

World Matchplay champion Van den Bergh enjoyed his best run in a ProTour event since August 2019 as he won through to the semi-finals, averaging 111 in a quarter-final defeat of Jamie Hughes and only losing eight legs on his way to the last four.

Poland's Kciuk enjoyed his best-ever finish on the PDC ProTour, producing two ton-plus averages in five wins on the day.

Premier League table-topper Nathan Aspinall continued his strong form with a nine-dart finish against Andy Boulton, although he was eliminated in the last 16 by Dolan.

The PDC Super Series 3 action continues on Sunday from 1400 local time (1300 BST) with Players Championship 10 taking place on the second of four days of action, with coverage to be streamed through PDCTV and bookmakers' websites worldwide.

Watch live coverage from two streams throughout the event in PDCTV - with subscription options including a £2.99 One-Day Pass and a £3.99 Four-Day Pass.

Nine-Darter!
Nathan Aspinall landed a nine-darter during his second round game with Andy Boulton.