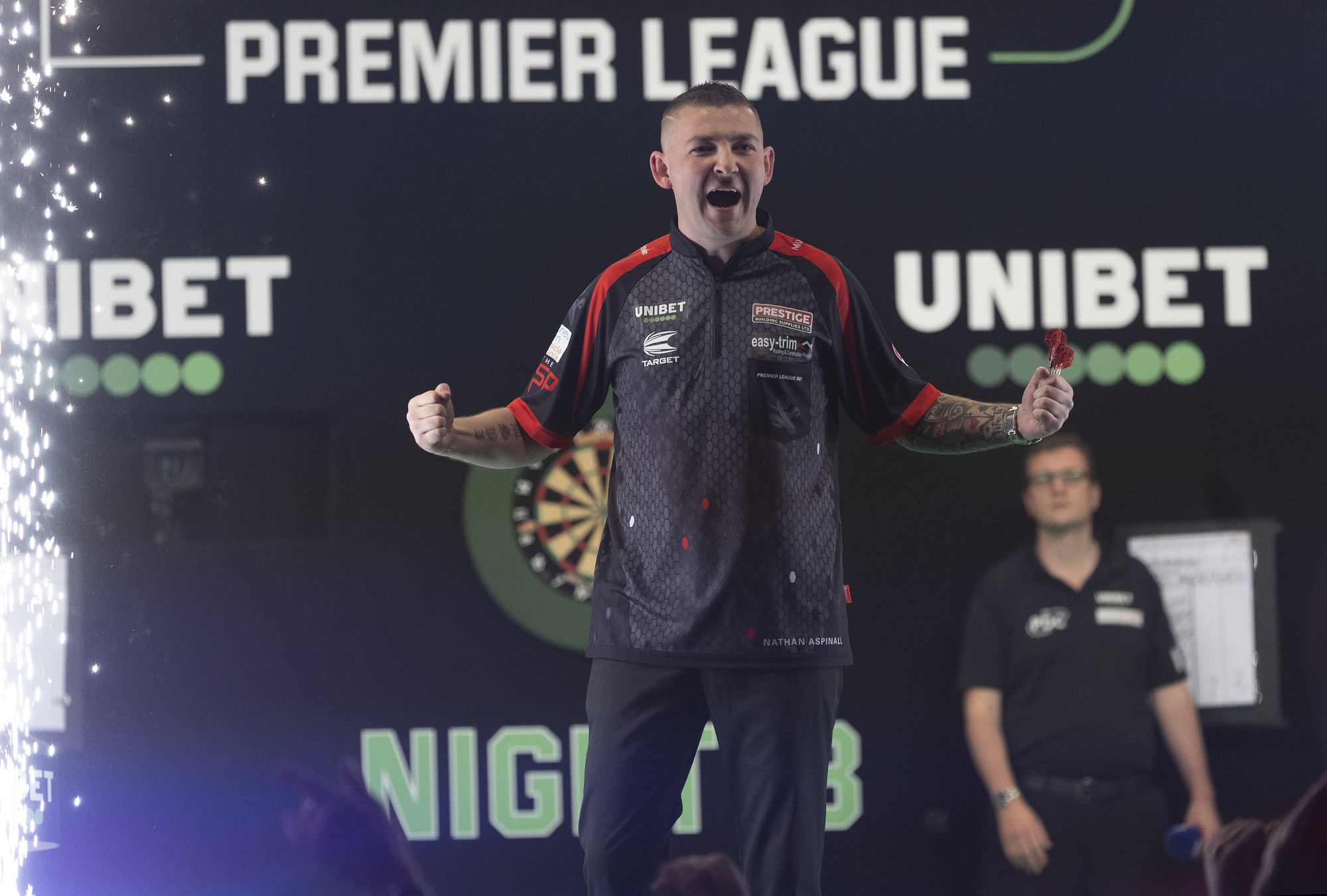 Following over five months since a live crowd were able to attend a PDC event, almost 700 fans flocked to the Marshall Arena as the final week of the 2021 Premier League began.

Former UK Open champion Aspinall rose to the occasion as he bounced back from defeats in his last two games behind closed doors to defeat Michael van Gerwen.

The 8-3 triumph was aided by two 120 checkouts, and it was Aspinall's stronger start in opening up a 5-1 lead which proved crucial before he closed out a win which sees him move above Van Gerwen to top the league table.

"It's a massive two points and it was a great buzz tonight," said Aspinall. "I was really nervous coming into the game because we've missed the fans, and win or lose I wanted to enjoy it tonight.

"This is what darts is all about, and I loved every minute of it. I think we were both trying too hard to play well but the crowd were got me through.

"I finished really well and when I get a bit of a lead I felt more comfortable. It wasn't my best performance, but the two 120 finishes won me the game and it's a very good two points."

Wright, meanwhile, kept alive his Play-Off hopes by ending a three-match losing run with an 8-4 win over James Wade as the flamboyant 2020 World Champion returned to his best.

Wright danced his way to the oche before coming from 2-0 down with a brace of 11-darters as he surged ahead before finishing a key 103 in leg ten on his way to victory.

Both Wright and Wade sit five points adrift of the top four with just three league games remaining - but the former finalist was "on a high" after being cheered to victory for the first time since December by a live crowd.

"The crowd make such a difference, it was amazing," admitted Wright. "They inspired me and I feel so alive - it was so nice being nervous backstage!

"All the crowd played their part because I've missed them. Last year I won my last four games to make the Play-Offs so if I'm playing well then everyone else has got to watch out."

Jonny Clayton won the first game back in front of fans, finishing eight doubles from 14 attempts in an 8-1 defeat of Gary Anderson to boost his Play-Off hopes.

After the opening two legs were shared, Clayton reeled off seven straight legs as he punished seven missed doubles from Anderson to dent the two-time champion's chances of reaching the top four.

"It was absolutely brilliant," said Clayton. "It's a massive buzz because the crowd makes darts, so it was amazing to get them back and the atmosphere was fantastic.

"I had a few people cheering for me and there were a couple of Welsh flags, in, so it's a proud moment.

"I was so nervous before I went on but I relaxed and my darts kept going. I took my chances and I've done my job - I'm chasing a dream and I'll keep turning up over the next three days and working hard."

Jose de Sousa extended his unbeaten run to five matches with an 8-6 win over Dimitri Van den Bergh which sees him jump above the Belgian in the league table to sit third, ahead of Clayton on leg difference.

The Portuguese took a break of throw in leg four as he opened up a 4-1 lead, and landed a superb 11-darter as he secured at least a point at 7-4.

Van den Bergh battled back with legs of 13 and 14 darts to take the game all the way, but De Sousa landed a 180 in the decider before pinning double ten to seal a key win.

"It's a wonderful feeling," said De Sousa. "I didn't feel the pressure and it's nice to see the crowd behind us again. The fans know the player and the person that I am and I got a lot of respect from them.

"I know this is a big win for me. Every game in the Premier League is very difficult and every point is important.

"It was a difficult game for both of us because Dimitri is a great player and I think he can maybe be World Champion in the next few years, so I'm very happy to get this win."

The battle for Unibet Premier League Play-Off places continues on Tuesday, with Wright and Wade facing crucial battles against Van den Bergh and Aspinall respectively to keep alive their hopes of claiming spots in Friday's Play-Offs.

Van Gerwen plays Anderson, while Clayton and De Sousa will clash in a game involving two of the current top four.

Click here for ways to watch the Unibet Premier League.