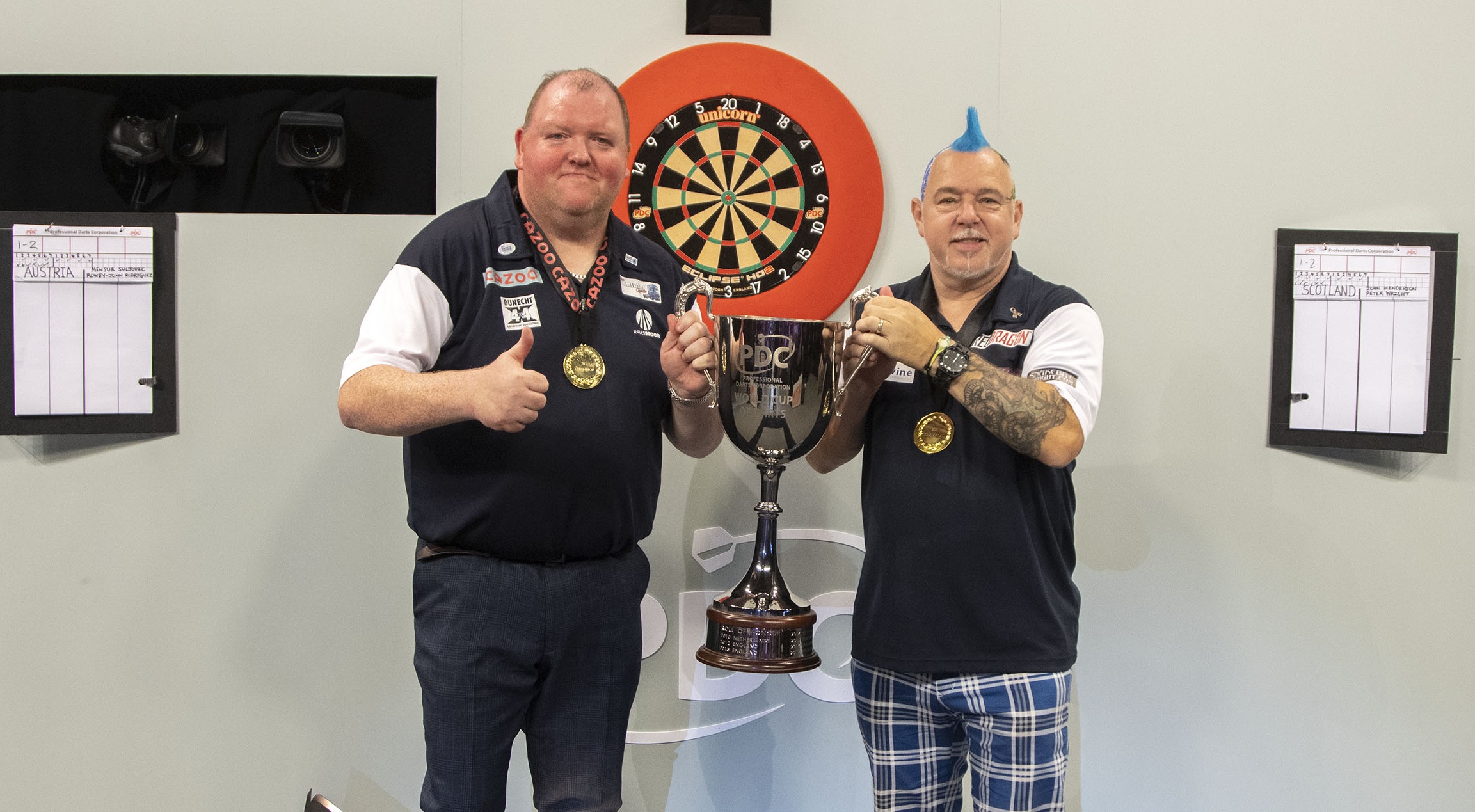 Scotland secured glory at the Cazoo World Cup of Darts for a second time as Peter Wright and John Henderson defeated Austria's Mensur Suljovic and Rowby-John Rodriguez 3-1 in Sunday's final.

Wright had linked up with Gary Anderson to win the World Cup two years ago, and this time helped ensure the greatest day of Henderson's career as they scooped the £70,000 top prize.

The pair had seen off China and Poland to win through to Sunday's final stages, and overcame two former champions to continue their title bid.

They firstly came from one point behind to win their quarter-final against the Netherlands in a dramatic sudden-death leg of their Doubles decider against Michael van Gerwen and Dirk van Duijvenbode.

The duo then ended Wales' title defence in a brilliant semi-final which also went to a sudden-death leg in their Doubles contest.

Austria, meanwhile, survived three missed match darts from Northern Ireland's Brendan Dolan in a sudden-death leg in their quarter-final and then defeated England 2-0 to reach their first World Cup final.

Suljovic got Austria off to a flying start in the final by defeating Henderson 4-1 - hitting a 160 finish along the way - only for Wright to overcome Rodriguez by the same scoreline to level.

A dramatic Doubles tie saw Austria open up a 3-0 lead, only to miss five match darts as Scotland pulled back level.

Suljovic then missed two darts at tops in the deciding leg as Henderson held his nerve on double ten to put Scotland 2-1 up and one tie away from victory.

That came in the next Singles clash, as Wright opened up a 2-0 lead over Suljovic and also took out 156 before holding off his rival's fightback to finish double 16 and seal glory for the Scots.

"To go back home as World Cup champions, I'm speechless," admitted Henderson. "To win this means everything - it's my first PDC title and it's been an honour to play with Peter.

"How he kept his nerve in that last game I don't know. It's been a team effort but I think we've been the best side throughout the whole tournament.

"It's a team game but he's a legend. I've got to thank Peter for everything he's done this week and all the advice.

"He has mentored me and I can't thank him enough. He's captained me so well and looked after me this weekend, and I believe his captaincy won this for us."

The victory was the biggest of Henderson's career and also secures him a spot in November's Cazoo Grand Slam of Darts.

"It's fantastic for Scotland and I'm going to enjoy this," he said. "Hopefully I can kick-start my own career and this is the start of many things to come."

Wright had won the World Matchplay in July and Sunday's success in Jena ensured back-to-back TV titles and his second World Cup success.

"It means so much to me," said an emotional world number two. "Every time I play I'm putting everything on the line.

"We had the hardest draw but John helped to carry me through. He stood up proud and hit the doubles to get us into the final.

"It was a privilege to play with him - John's going to take over the world now like Jonny Clayton did after winning it last year."

The Austrian duo have also put themselves in provisional qualifying places for the Grand Slam of Darts after they enjoyed their country's best-ever World Cup campaign.

For Suljovic, the weekend in Jena was a successful return to the big stage after missing the World Matchplay through illness.

"It's a brilliant feeling," said Suljovic. "I'm so happy I'm back.

"After three months out I said I would give my best but asked Rowby to help me. I'm so happy to be in the final with my best friend."

Rodriguez, meanwhile, was appearing in his first televised final since the 2014 World Youth Championship decider, and is hoping to use the success as a springboard for his career.

"Of course if you lose the final you're disappointed, but for me there's happiness to get to the final," said Rodriguez.

"We didn't expect anything - we were not seeded and we went to the final. If you're in the final you want to be the champion, but unfortunately we didn't.

"I played really good in the semi-final but I didn't play my game in the final. We shouldn't have lost the Doubles game when we were 3-0 up."

England's James Wade and Dave Chisnall ended host nation Germany's hopes in the quarter-finals with a 2-0 success as they dropped just one leg against Gabriel Clemens and Max Hopp.

Wales had continued their title defence with a 2-0 quarter-final defeat of Australia, although they required a 144 checkout from Clayton to snatch victory in the second Singles tie against Damon Heta.

Henderson defied a 103 average from Price to win their Singles tie 4-2 as the Scot gave his nation the early advantage.

Premier League champion Clayton hit back for Wales as he defeated Price 4-2 in the second Singles contest, creating a Doubles decider for a place in the final.

Scotland took the first two legs of the Doubles contest, only for Wales to produce legs of 14, 13 and 11 darts to move 3-2 up.

A 14-darter from Scotland ensured a sudden-death leg, and they were first to a finish as Henderson took out 46 on double 18 to move the 2019 finalists into the final.

Whilst Wright was part of the 2019 team which took glory - alongside Gary Anderson - Henderson will be appearing in his first televised final and has also secured a provisional qualifying place in November's Grand Slam of Darts.