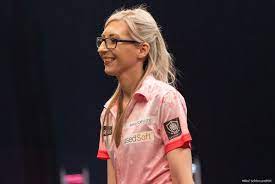 Lisa Ashton claimed her spot in November’s Cazoo Grand Slam of Darts on the final day of the 2021 PDC Women’s Series as she shared wins with Fallon Sherrock and Mikuru Suzuki in Barnsley.

Ashton won Sunday's opening Event Ten and was the runner-up in Event 11, on a day that also saw Sherrock claim a sixth title of 2021 and Japan's Suzuki secure a first in the final event of the year.

The results mean that both Ashton and Sherrock will make appearances in the Grand Slam and the William Hill World Darts Championship after dominating the Women’s Series, winning five and six titles respectively.

Ashton was in sensational form as she began Sunday’s action with a 4-0 whitewash of Donna-Maria Rainsley, averaging over 95.

She would go on claim back-to-back 4-2 wins over Joanne Locke and then Laura Turner, before overcoming rival Sherrock in a last-leg decider to reach the semi-finals.

Another dominant display would follow in the last four and the Lancashire ace defeated Rhian O’Sullivan 5-2 to set up a mouth-watering final with Anastasia Dobromyslova.

The decider was gifted to Ashton, as the Russian was unable to find the answer to her opponent and went down to a 5-0 defeat as the PDC Tour Card Holder stormed to victory.

Event 11 saw a dominant Sherrock return to form, dropping just two legs on her way to the final, where she would face Deta Hedman.

Hedman, who would eventually finish third on the overall Order of Merit, struggled to keep pace with Sherrock as the 27-year-old blew her opponent away, averaging almost 96 on her way to a 5-1 win.

The title meant Sherrock would end with six victories in this year’s PDC Women's Series, and she subsequently withdrew from the final event knowing her place in the Grand Slam and World Championship had already been secured.

That withdrawal opened the door for the remainder of the field to break the Sherrock-Ashton dominance, and that chance was taken by former World Championship qualifier Suzuki.

The Japanese star dropped just one leg in her opening round victory over Jane Biggs, which proved to be the last one she would concede on her way to the final.

Whitewash wins over Jackie Wilkinson, Laura Patton, Joanne Locke and Lorraine Winstanley would follow as Suzuki marched in to the final against Ashton.

In the decider, Suzuki raced in to a 4-1 lead before Ashton threatened to take the crown away from her with an impressive comeback, but the 39-year-old held her nerve to pin double one and secure the last title of the 2021 Women’s Series with a 5-3 success.

A total of 12 events were played out across two weekends of action, with Sherrock narrowly finishing top of the Order of Merit with £8,150 prize money, just ahead of Ashton's £7,650.

The top eight players in the overall Order of Merit will be offered free entry to the 2022 PDC Qualifying School, as the PDC aim to continue the growth of the women’s game.

See full results in the Match Centre via this link.

See the PDC Women's Series Order of Merit via this link.