Noppert to miss Ladbrokes Masters as Whitlock steps in

News
>
Noppert to miss Ladbrokes Masters as Whitlock steps in 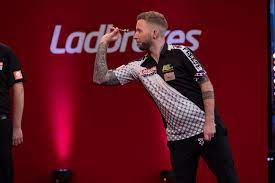 Danny Noppert has withdrawn from the 2022 Ladbrokes Masters, and will be replaced by Simon Whitlock.

Dutchman Noppert would have been the 18th seed for the 24-player event in Milton Keynes from January 28-30, but has withdrawn to remain with his partner in the Netherlands for the birth of their first child.

Under PDC rules, Noppert's place in the draw is now taken by the next player from the PDC Order of Merit, meaning that former European Championship winner Whitlock steps into the field.

The Australian ace will meet Dirk van Duijvenbode in the first round on Friday January 28, with the winner progressing to play Peter Wright in round two.

The Ladbrokes Masters will be broadcast live on ITV4 in the UK, through the PDC's worldwide broadcast partners including DAZN and Viaplay, and on PDCTV (excluding UK and Netherlands based subscribers).